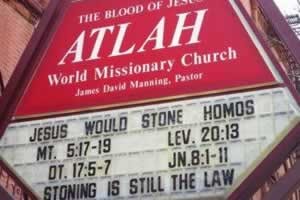 New York City - A lesbian has posted video of her asking an anti-gay church in Harlem, New York to stone her.

The message includes a reference to Leviticus 20:13, which reads, "If a man lies with a man as with a woman, both of them have committed an abomination; they shall surely be put to death; their blood is upon them."

Manning reportedly reiterated this claim in a YouTube video which has since been taken down.

"Stoning of the homos is now in order," Manning said. "Stoning is still the law."

In her video, Jennifer Louise Lopez visits the church and asks to be stoned.

"No, I don't have any stones," the man replies from the church door.

"Are you going to send a person to stone me?"

"He's not here," the man says."Come back tomorrow."

"So, you're not going to stone me? Alright, thank you," she adds.