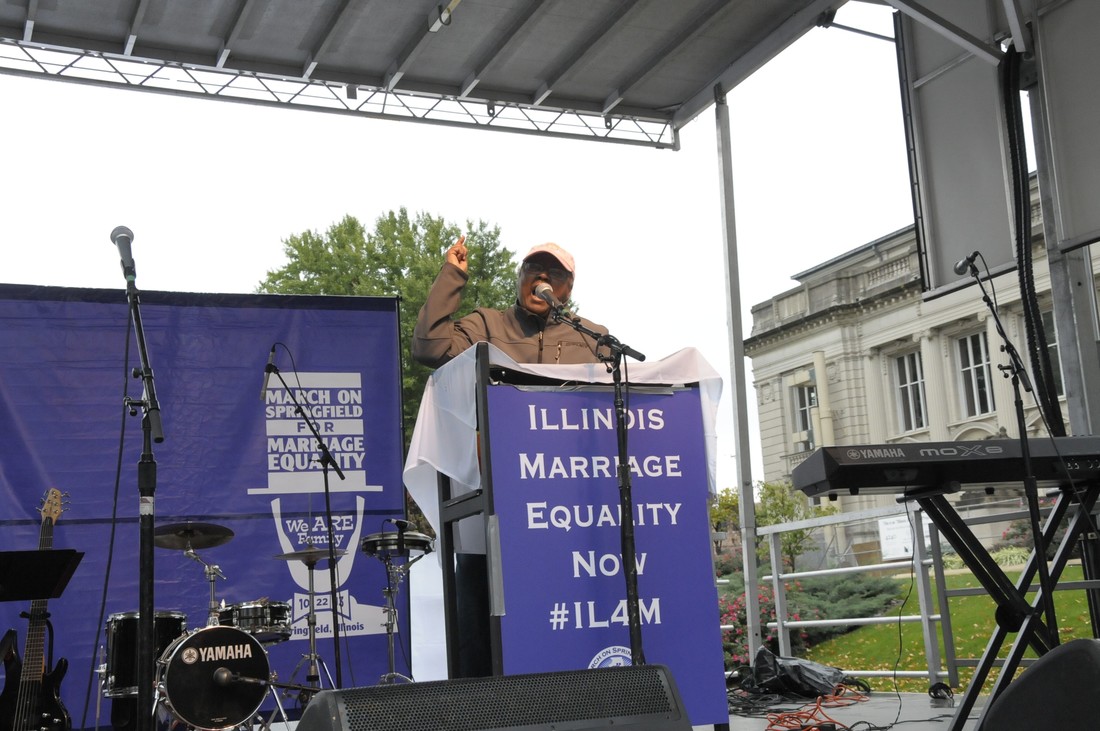 photo credit // hal baim/windy city times
Chicago, IL - Vernita Gray, one of Chicago's longest and most prolific activists for LGBT rights, has died. She was 65.

Gray and wife Pat Ewert were the first same-sex couple married legally in Illinois, Nov. 27, 2013, after winning a court victory because of Gray's critical health situation. That paved the way for additional court rulings that hastened marriage in Illinois ahead of the original June 1, 2014 implementation of full marriage equality in the state.

Gray, a native Chicagoan, came out as a lesbian soon after she attended the 1969 Woodstock music concert in New York, where she learned about the Stonewall Riots.

A longtime cancer survivor, Gray lost her battle March 18 just before midnight, with her wife by her side. Friends and family had visited with Gray in her final weeks, as she said her goodbyes. She was laughing and giving advice up until the end.

Gray's cultural and activist interests were varied. She was a poet who knew how to rally the troops at events, including anti-violence marches and most recently the Oct. 22 March on Springfield for Marriage Equality, her last public speaking engagement.

She worked in the Cook County State's Attorney's Office for 18 years, including in the position of victim/witness assistant, where she helped LGBT crime survivors, and as an outreach worker on LGBT issues. Prior to that, she owned the popular Sol Sands restaurant in Uptown.

Gray was one of those people you might run into at any kind of event and among any sort of crowd—at every Chicago Pride Parade since the first in 1970, at a community gala or fundraiser, at a women's music festival, at a poetry slam reading her own words, or even at the White House—which she visited four times during President Barack Obama's administrations.

As a young girl she watched Dr. Martin Luther King, Jr., try to desegregate the heavily divided city of Chicago. Her visits to the White House brought tears to her eyes because she never thought she would see an African-American president, especially from her hometown of Chicago. She first went there for a June 2009 Pride reception. The next time, in October of 2009, was for Obama's signing of the federal hate-crimes law, something she had supported for many years. Gray's most recent visits were in December 2009 and 2013, for White House holiday celebrations. She attended the 2009 event with her good friend Mary Morten. For one visit, she went with Renae Ogletree, who at the time was in the final months of her unsuccessful battle with cancer.

Gray was a ubiquitous activist. In the early 1970s, she was instrumental in starting the first gay and lesbian helpline in Chicago in her own apartment. Her one-bedroom place on 56th Street and Drexel Avenue also served as an overnight shelter for a number of teens who had been kicked out by their families because they were gay, lesbian or transgender. Gray gave them a place to go and was there to lend a hand when they needed someone.

In the 1970s she was an editor and wrote for the Lavender Woman newspaper. She also worked on her own writing and poetry, eventually releasing the chapbook Sweet Sixteen.

Gray was an activist who juggled her love of community with her love for friends and partners. She had several long-term relationships, including one in which she helped raise two children.

For her work, Gray has received dozens of honors. She was inducted into the Chicago Gay and Lesbian Hall of Fame in 1992. She received the prestigious Stonewall Award, the Horizons Community Services Human First Award and many other accolades.

Gray's life is documented in the upcoming book, Vernita Gray: From Woodstock to the Whitehouse, by Tracy Baim and Owen Keehnen.

After a battle with breast cancer in the early 1990s, Gray's struggle with cancer took a turn for the worse two years ago. She knew her time was limited, but she shared it with the community, advocating until the very end for full equality.

Judge Patricia Logue, former head of Lambda Legal Midwest and a longtime lesbian activist herself, performed the marriage ceremony for Gray and Ewert in front of several dozen family and friends. In her remarks, Logue called the event "a very personal yet historic occasion—an event long-awaited and hard-won, (and) one that crystallizes the impact of equality and inequality in all our lives. And once, again, as so often happens in our nation's long civil rights journey—we are assisted by a federal court decree in favor of justice and humanity for a minority group."

Among Gray's survivors, in addition to her wife Pat Ewert, are her mother Fran, are many longtime friends including Mona Noriega and her children Camille and Ramon, Fay Robinson, Kay Miles, Mary Morten, Paul Fairchild, Jim Bennett and hundreds more.

In lieu of flowers, donations should be made to Affinity Community Services, Broadway Youth Center at Howard Brown, or Center on Halsted.

Statement from Mayor Emanuel on the passing of Vernita Gray

Vernita Gray speaks at March on Springfield on Oct. 22, 2013