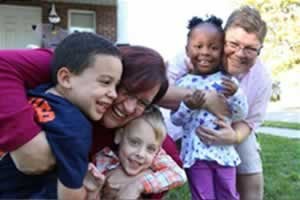 A two-week trial in a case challenging Michigan's ban on gay marriage came to a close Friday with the federal judge overseeing it saying he expects to rule within two weeks.

"We are hopeful we'll be on the right side of history," DeBoer told reporters on Friday. "Everyone realizes that marriage means family, and that's what we want."

The state has argued that the ban is necessary to protect children.

"This is about ...what's best for the children of the state of Michigan," Kristin Heyse, an attorney for the state, said in her closing arguments.

"Voters decided a mom and a dad are important and not interchangeable," Joy Yearout, a spokeswoman for the attorney general's office, said after the hearing. "The strongest argument we have is that [voters] decided it's best for kids to be raised by a mom and a dad."

Witnesses for the state included Canadian economist Douglas Allen, who claimed that children raised by gay parents are more likely to have difficulties in school, and Mark Regnerus, an associate professor of sociology at the University of Texas at Austin, who testified that the state "should be skeptical" of gay couples raising children.

Both witnesses have strong ties to conservative groups. For instance, Regnerus' controversial 2012 study was funded by The Witherspoon Institute, which is opposed to marriage equality. During cross-examination, Allen denied that he sits on the board of advisers of the Ruth Institute, a vocal opponent of LGBT rights. Yet Allen is listed on the group's site as a member of its "Circle of Experts" available for speaking engagements.

Ken Mogill, one of the attorneys representing the plaintiffs, said that their witnesses presented convincing arguments that gay couples make good parents.

"The witnesses are at the top of their fields," Mogill said. "They all know what they are talking about and don't try to put a spin on it."

Federal judges in recent months have knocked down all or part of similar bans in Utah, Ohio, Oklahoma, Kentucky, Virginia and Texas.

On the same day that Michigan's trial wrapped up, four gay couples in Indiana filed a similar lawsuit.