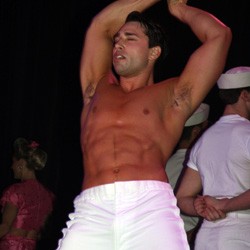 Chicago, IL - With two shows on Saturday, February 9 at the Park West, Test Positive Aware Network's (TPAN) fundraising event Chicago Takes Off brought more than 1,200 people to the hottest event in the city to raise more than $100,000.

"We're very happy to report these figures from Saturday's event," said TPAN's Executive Director Rick Bejlovec. "We're thankful to have the overwhelming support of the Chicago community to raise awareness about HIV/AIDS and help us continue the services and programs that we offer at TPAN."

More than 100 volunteer performers, designers and technicians were needed to produce and cast the event, along with a planning committee of 25, and more than 70 volunteers to help decorate the venue, costume performers and dancers, sell raffle tickets, usher and check in all of the guests throughout the evening during the event. Twenty-four executive producers provided additional financial support to help produce the event.

"We're very proud of all of our choreographers, production and cast members who volunteered hundreds of hours to produce this amazing fundraising event," said Keith Elliott, co-producer of Chicago Takes Off.

"When we conceptualized this event, we had hoped that the community would embrace it and build upon it; and in its second year, the Chicago community has done just that," said co-producer Todd Kiech. "Performers, dancers and a skilled production crew have really helped us create an artistic, sexy event that we can all enjoy for many years."

TPAN will be hosting the following major fundraising events in 2008: Jackets Required: The TPAN Tea on Sunday, March 9; Ride for AIDS Chicago, June 7 and 8; and the Aware Affair Gala: Superheroes on Saturday, September 13. Next year Chicago Takes Off is slated for Saturday, February 14, 2009.