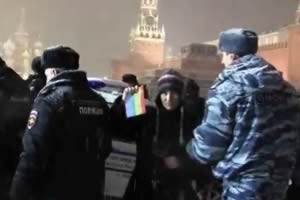 The AP reported that 4 gay rights activists were arrested in St. Petersburg on Friday.

The demonstrators, who gathered on St. Petersburg's Vasilyevsky Island, barely managed to unfurl a banner quoting the Olympic Charter's ban on any form of discrimination before they were carted off by police.

Russia in June outlawed the promotion of "gay propaganda" to minors.

In a video accompanying the story, the activists, two of whom are from Sweden, sing the Russian National Anthem and wave rainbow flags on Red Square. According to the report, the demonstration lasted less than a minute before police intervened.

The singing of the Russian National Anthem in support of LGBT Russians was popularized by the LIVE AND LET LOVE campaign, which recently released a video featuring thousands of choir members singing the anthem in Stockholm's Olympic Stadium.