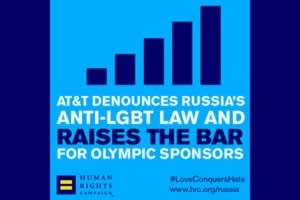 AT&T on Tuesday became the first major U.S. corporation to condemn an anti-gay law approved by Russia, host of the upcoming Winter Olympics.

The Sochi Games, which begin Friday, are being overshadowed by Russia's new law, which prohibits the promotion of "gay propaganda" to minors, effectively outlawing public demonstrations of support.

"The Olympic Games in Sochi also allow us to shine a light on a subject that's important to all Americans: equality," AT&T wrote in a blog post titled A Time for Pride and Equality.

"AT&T has a long and proud history of support for the LGBT community in the United States and everywhere around the world where we do business. We support LGBT equality globally and we condemn violence, discrimination and harassment targeted against LGBT individuals everywhere. Russia's law is harmful to LGBT individuals and families, and it's harmful to a diverse society."

"Today, AT&T courageously recommitted itself to fairness, equality and basic human rights," HRC President Chad Griffin said in a statement. "AT&T should be recognized for showing true leadership in opposing this hateful Russian law, and other sponsors that have failed to lead should take corrective action immediately. A company that claims to support LGBT equality should do so wherever it operates, not just in the United States, and we call on all Olympic Sponsors to follow AT&T's lead and publicly denounce Russia's anti-LGBT law."

AT&T has been a partner of the U.S. Olympic and Paralympic Team for the past 30 years.