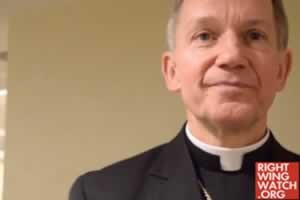 Springfield, IL - Bishop Thomas J. Paprocki of Springfield, Illinois has defended holding a "minor exorcism" against a gay marriage law approved by lawmakers, calling it an act of love.

In response, Paprocki held an exorcism at the Cathedral of the Immaculate Conception on the same day that Quinn signed the marriage bill into law.

"I exorcize you; every unclean spirit; every power of darkness; every incursion of the infernal enemy; every diabolical legion, cohort, and faction; in the name and power of our Lord Jesus Christ," Paprocki said during the hourlong ceremony which attracted a large crowd of worshipers.

"Dare no more, O cunning serpent; to deceive the human race; to persecute the Church of God; to shake the chosen of God and sift them like wheat," he continued.

In comments to LifeSiteNews.com, Paprocki called the exorcism a "fitting" response, saying such services are needed when the "church is under persecution or some opposition, and certainly the redefinition of marriage is very much in opposition to God's plan for married life."

Paprocki explained that the ceremony was about love.