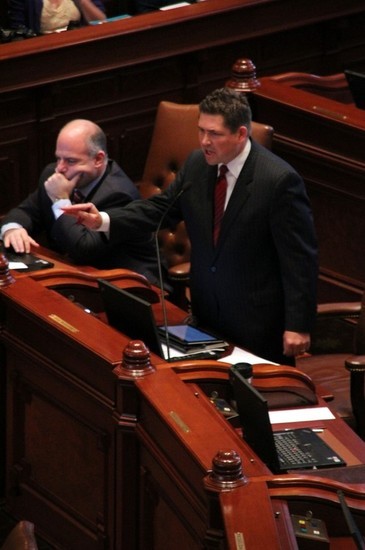 Springfield, IL - Illinois Senator Kyle McCarter, a Republican, on Tuesday introduced legislation which seeks to repeal the state's new marriage equality law before it even goes into effect.

The conservative lawmaker vehemently opposed the Religious Freedom and Marriage Fairness Act (Senate Bill 10), during a Senate floor debate on Feb. 14, 2013. "We are jeopardizing freedom, not expanding it," McCarter (R-Lebanon) argued.

The marriage equality law ultimately passed by a 34-21 vote in February and again in November to concur with the House in a 32-21 vote.

"Fortunately for Illinois, a solid majority of the Senate is on record supporting marriage equality, and the Senate President who is committed to protecting the freedom to marry," Cherkasov told ChicagoPride.com.

Cherkasov said his group would continue to monitor the new measure.

"Well, it looks like it's an election year," Martinez said in an emailed statement. "Even though most Republican leaders in Illinois have stated it is time to move past the marriage debate, Senator McCarter introduced a bill that would harm thousands of families and couples across Illinois. The Senator also knows full well that this bill does not have the support to pass, especially in the Senate."

"Why would the Senator waste time and resources to rehash a debate where the outcome that has been decided is supported by the majority of our state," questioned Martinez.

Illinois marriage equality law, which was signed by Governor Quinn in November, does not take effect until June 1, 2014.