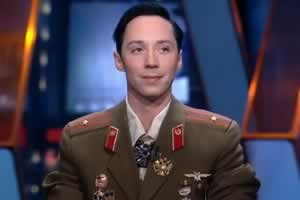 Olympian Johnny Weir believes that his opposition to a boycott of the Winter Olympics over a Russian anti-gay law has put him "in a crossfire."

Passage of the law in June, which prohibits the promotion of "gay propaganda" to minors, led gay rights activists to call for a boycott of next month's Sochi Games.

The openly gay Weir, who will be joining NBC for its coverage of the Winter Olympics in Sochi, has been accused of selling out Russia's LGBT community.

"He is selling out millions of people to satisfy his desire not to forgo his income or status," Ann Northrop of Queer Nation told Gay City News. "Is this what he would have done in Germany in 1936?"

"I've come under so much hate and scrutiny from within my own LGBT community for my views on the Olympics," the flamboyant figure skater told Reuters.

"But as somebody who watched my parents sacrifice everything so that I had at least one chance of making the Olympics, I could never boycott the Olympics whether they be in Pyongyang (North Korea), in Uganda, in Iran or Mars."

"I would have competed there because my whole life has been about going to the Olympics. Being gay isn't something that I chose, being gay is something I was born into."

"But being an Olympic athlete was something that I chose and something I worked hard for and I'll see it to any necessary end."

Despite stating that he sees the Olympics "strictly as a sporting event and not a political event," Weir acknowledged that his presence – as a gay Olympian – sent a message to Russia.