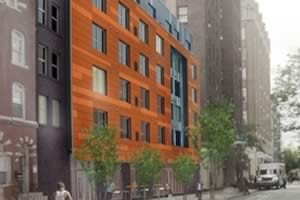 The $19 million housing facility was co-developed by the Dr. Magnus Hirschfeld Fund and Pennrose Properties. Tenants must be 62 or older and their yearly income cannot exceed $33,000. Monthly rents range from $192 to $768 based on income.

The L-shaped building, named the John C. Anderson Apartments after a city councilman who backed gay rights, features a lobby overlooking a 6,000-square-foot courtyard and includes retail space on the ground floor. The facility is located on 13th Street between Locust and Spruce in Philadelphia's predominantly gay neighbor.

"Why should people, who were the pioneers of the community, not live with dignity? It's outrageous," Mark Segal, chairman of the Dr. Magnus Hirschfeld Fund, told the AP. "We have to take care of our own – nobody else is."