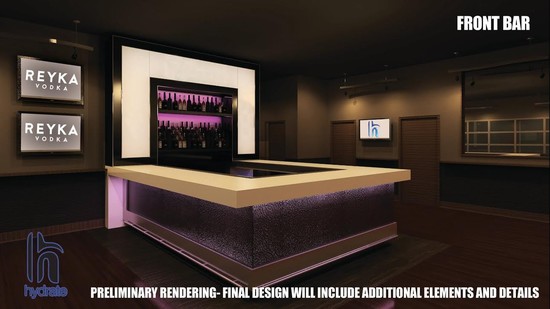 The owner says the Boystown staple is getting a very significant upgrade as construction crews rebuild both the interior and exterior of the nightclub.

Chicago, IL - Fans of North Halsted nightlife will soon have a shiny new venue to burn the midnight oil in as owners of Hydrate Nightclub say they're spending twice as much as they initially anticipated to completely renovate the Boystown staple.

Mark Liberson – who also owns nearby bars Elixir Lounge, Replay Beer & Bourbon, and Halsted's Bar and Grill – first announced plans to update the nightclub on Dec. 30. But he told ChicagoPride.com the time for a more significant upgrade at 3458 North Halsted is now, meaning the project's budget has been vastly expanded.

"The amount of money is significant," said Liberson, who declined to disclose the actual dollar amount. "From the initial plan to now, we doubled our budget. We kept extending to it more and more, and ultimilatey we ended up ripped out the bars in both rooms. We're rebuilding it. It's time. We've served a lot of cocktails over the years, but it's time to breathe new life into Hydrate and to bring something closer to where the block is heading. We want to grow in the community, and we want the street to be that great piece of gay nightlife."

Liberson said while Hydrate has undergone multiple smaller remodels since opening in 2003, this is the first time in 10 years they've done something this drastic. Everything from the sound system to the building's exterior is being overhauled, with plans to reopen in mid- to late-February.

"We're adding a lot of upscale finishes to the space, and a whole new feel from the exterior to the interior," Liberson said. "We're redoing the bathrooms, redoing the bars, changing all the materials, and even changing the exterior of the bar. We're changing everything. It's about as completely new as you can get."

"We decide that it was time to create something that has a totally different feel and to make an investment for the next decade."

That includes some "fabulous" crystal chandlers, as Liberson described them, straight from the grand ballroom of the former Ambassador West Hotel.

And while the physical environment is certainly going to change, the atmosphere is expected to the stay the same. The nightclub will still be called Hydrate and will keep its focus on a space to go dancing. Liberson tapped Chicago-native DJ Cindel – the winner of Matinee Las Vegas 2013 and Circuit Barcelona Festival 2013 – to line up the beats at Hydrate. It's slated to be the DJ's first residency in Chicago in 2014.

Other events and programs, however, are being developed to make the club more upscale and more than just a dance hall.

"We're adding a lot of new elements," Liberson continued. "The management team is working full-time on developing new programming, so there are a lot of efforts being made. It'll be a new environment that's modern and upscale and fun. We see this as a major transition point."