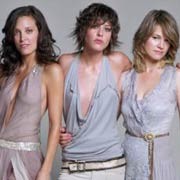 Los Angeles, CA - It truly is the season for giving, and to honor that tradition, a fan of the popular show The L Word has donated $1 million to the Dr. Susan Love Research Foundation in the name of some the show's most prolific stars. Actress Erin Daniels who portrays a gay breast cancer victim on the series inspired the anonymous donation.

The L Word, which is set mostly in the trendy world of Los Angeles, centers around the lives of a group of lesbian friends and was developed after the overwhelming success of the Showtime drama Queer as Folk. Slated for it's fifth season to begin in 2008, the show stars Jennifer Beals, Katherine Moennig, Pam Grier and Leisha Hailey.

Daniels played Dana Fairbanks, Hailey's lover on the show, who discovered she had breast cancer in season three and eventually died of heart failure. The generous donor recognized the realism and truth the actress brought to the breast cancer story line and made the largest private donation to the Foundation ever.

The $1 million gift will be used to establish The Erin Daniels and Leisha Hailey Fund for Breast Cancer and all donations will be given to the Love Research Foundation.

"There are very few times in a woman's life where she feels she's been lucky enough to be part of something that will change lives," Daniels said in a press release. "This is one of those times. I am overwhelmed that my portrayal of Dana's story has inspired such an act of kindness and generosity, and elated to be part of it. I am thankful that so many women will be given hope due to Dr. Love's program."

In addition to that generosity, the anonymous donor intends to match dollar for dollar every donation made to the fund, which supports research aimed to end breast cancer in our lifetime.

"It is an honor that our breast cancer story line touched someone in such a tremendous way that she so generously gave to such a tragic illness, Hailey told the Advocate.

For more information about the Foundation, or to make a donation visit: www.dslrf.org.