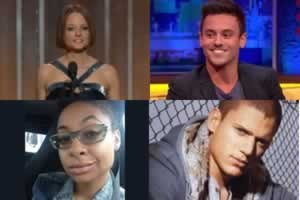 Wentworth Miller, Jodie Foster, Tom Daley and Raven Symone were among the celebrities who came out gay in 2013.

The 41-year-old Miller publicly came out gay in the course of declining an invitation to attend a film festival in Russia. In subsequent interviews, Miller revealed that he attempted to kill himself several times as a teenager.

Foster made headlines with a Golden Globes non-committal coming out speech.

British Olympic diver Tom Daley ended speculation about his sexuality by coming out bisexual. The 21-year-old Daley said in a YouTube clip that he fancied girls and was currently dating a man, rumored to be Milk scribe Dustin Lance Black.

Raven Symone, who is best known for her roles on NBC's The Cosby Show and Disney Channel's That's so Raven, came out lesbian in the course of cheering for recent gay marriage wins.

"I can finally get married! Yay government! So proud of you," she tweeted to hundreds of thousands of followers.