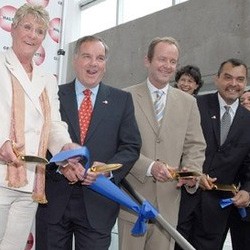 with the cutting of a ribbon the center on halsted opens

Stepping up: Center on Halsted's board of directors announced in April that Modesto "Tico" Valle would take over as the organization's executive director on July 1, when Robbin Burr would step down.

Kidding around: Three state representatives made headlines in April when they joked about a measure that would have made it easier for transgender people to obtain new birth certificates during a short debate on the house floor. Reps. Bill Black, R-Danville; Chapin Rose, R-Mohamet; and Art Turner, D-Chicago, made comments comparing trans individuals to animals, among other things.

Smooth move: On April 19, the Metropolitan Water Reclamation District of Greater Chicago unanimously approved to extend domestic partner benefits to its employees. In 2006, Comm. Debra Shore made history by becoming the first out lesbian to be elected to a non-judicial office in Cook County.

Pace yourself: Dozens protested the May 18 appearance of Gen. Peter Pace, former Chairman of the Joint Chiefs of Staff. Back in March, Pace had called homosexuality "immoral" in an interview with the Chicago Tribune. Over 1,400 people had signed a petition asking that the event's sponsors cancel Pace's appearance in light of his public stance. Center of attention: Youth Pride Center announced plans to construct a new center on Chicago's South Side on April 30. The organization primarily serves LGBT youth of color. A temporary location at 73rd Street and Cottage Grove is slated to open January 2008 until its permanent location is ready in 2010.

A new day: The new Center on Halsted officially opened its doors on June 5 at 3656 N. Halsted. It is the largest LGBT community center in the Midwest. The three-story Center is home to a number of the community's LGBT organizations, and includes a Whole Foods store, a recreation hall, a theater and more.

Run for it: In June, prominent lesbian activist and daughter of long-time Ald. Dick Mell, Deb Mell, announced that she will run for state representative in the 40th District. Mell is also the sister-in-law of Gov. Rod Blagojevich. Mell, and well as openly gay State Rep. Greg Harris, are running unopposed.

One step forward: At the Biennial Evangelical Church in America (ELCA) Churchwide Assembly held in Chicago in August, Lutherans passed a resolution, 538-431, that urges bishops to refrain from punishing gay and lesbian clergy for being in committed same-sex relationships. The decision came after a heated, two-day debate. They failed, however, to strike down its life-long celibacy rule for gay and lesbian clergy, but many viewed it as a small step forward.

Work it out: On Sept. 5, Cheetah Gym made headlines when its former owner abruptly shut down all three locations, citing alleged employee corruption. The event caused quite a stir in the community because many members of the LGBT community utilized the facilities. However, the locations were eventually re-opened.

Changes: On Oct. 24, Lesbian Community Cancer Project (LCCP) announced that it would become a program of Howard Brown Health Center, where it has been housed since 2004. The organization also changed its name to Lesbian Community Care Project. Both organizations said they could serve the community better together than separately. LCCP was founded in 1990.

What a challenge: In a direct challenge to the Evangelical Lutheran Church in America's celibacy rule for gay and lesbian clergy, Chicago's Resurrection Lutheran Church ordained lesbian minister Jen Rule on Nov. 17.

On Feb. 27, longtime activist Rene Van Hulle passed. He was a member of the Chicago Gay and Lesbian Hall of Fame. He was instrumental in the fundraising projects of several organizations, such as Chicago House and the Imperial Windy City Court of the Prairie State Empire, where he reined as Empress II Fabiola.

Sports pioneer and LGBT activist Peg Grey passed away on Feb. 27 due to complications from cancer. Grey helped unite the Chicago gay and lesbian communities through sports. She was the first female co-chair of the Federation of Gay Games.

Medicine and gay rights pioneer Arlene Halko passed away March 22 of heart failure. She was inducted into the Gay and Lesbian Hall of Fame in 1996 for her work in the LGBT community. She was Dignity/Chicago's first lesbian president, a co-founder of the AIDS organization Chicago House and much more.

Windy City Times co-founder Jeff McCourt passed away in May. He co-founded the publication in September 1985 with Tracy Baim (the current publisher), his partner Bob Bearden and Drew Badanish.

Onetime Chicagoan activist Ferd Eggan passed away due to complications related to HIV and liver cancer on June 6. He was very involved in the AIDS organization ACT UP. During his time in Chicago, he joined the Gay Liberation Front and co-founded ACT UP/Chicago before moving to Los Angeles in 1990.

On June 30, former pastor of the Church of the Open Door, Rev. Thom Ford, passed away of a heart attack. He also served as a sign-language interpreter at events. Ford did a lot of work in the LGBT African American community, and was also an AIDS services advocate.

Gaston Justice Jenkins—a gay veteran known to friends and family as "David"—passed away Dec. 13 from complications of Parkinson's disease at Warren Barr Pavilion. He was 75.