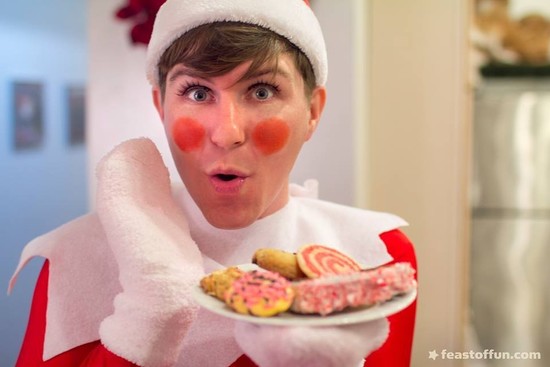 tommy holl as the real elf on the shelf

Despite loosing a pinky to cancer, Tommy Holl remains in the holiday spirit

Chicagoland native and active member of Chicago's LGBT community Tommy Holl is donning his red onesie and felt collar again this year to spread Christmas cheer as The Real Elf on the Shelf. Holl appeared in full Christmas garb on WGN Morning News on Tuesday, December 17, where he sat down with weatherman Paul Konrad.

"I'm head of public relations for the North Pole and this is a very busy time of year," Holl as the Real Elf on the Shelf, said. "We have to get from city to city promoting the Christmas spirit and getting everyone off the naughty list and onto the nice list before Christmas."

Holl has volunteered extensively within Chicago's LGBT community, putting in time for groups like Chicago House, TPAN and Equality Illinois. He's been a part of Barlesque, The Night of 100 Drag Queens and even his 30th birthday, which he celebrated this year, was a fundraiser for Equality Illinois held at Sidetrack in Boystown. The evening of live music, comedy and drag featured performances by Stephen Leonard and Sami Grisafe, comedy by Bradley Thomas, door prizes, a roast and much more.

"I always joke and say it's kind of like gay high school -- everybody's a stranger but once," Holl told ChicagoPride.com. "It's definitely not a bad thing... I've been involved in a lot of things over the years... I always think 'that sounds like fun -- I want to do that too!'"

Holl grew up in the western suburb of Clarendon Hills, Illinois, and is surrounded by family with deep roots in the Chicago area. He took classes at Columbia College for broadcast journalism and has a resume that includes interning at NBC5 News and working in advertising, sales and as a personal assistant. It wasn't until he was employed at a plastic surgeon's office, however, that the idea of The Real Life Elf on the Shelf was born.

Part of Holl's job last year included sending out 500 holiday cards from the office, a task that went from something fun and festive to something redundant and obligatory. While at a holiday party, three friends ("shoutout to Chris Rutledge, Scott Paracheck and Tony Akers," Holl joked) mentioned Holl's resemblance to a relatively recent, but popular Christmas character: The Elf on the Shelf.

Created in 2005 by a mother and her two daughters, the Elf on the Shelf is a figurine that parents purchase to start putting out at Thanksgiving. Essentially, the elf acts as a spy for Santa Claus, reporting back to the North Pole each night and returning to a different spot before morning. The tradition has spawned some rather comic backlash in recent years, but mostly it is a well loved part of Christmas for today's younger kids.

"My family's great, but we're not the family all with the same polos on the beach, like we don't do Christmas cards," Holl joked when explaining his decision to put himself on the office holiday cards, dressed as the Real Elf on the Shelf. "And it was fun, it was a hit -- everybody seemed to like it, they really enjoyed it."

Holl proposed the photo shoot to Kyle Heath, the man behind TPAN's Barlesque, and as timing had it, Heath could squeeze in Holl that very day. With just a red onesie from Beatnix, a couple socks from Marshall's to act as gloves, a homemade felt collar and a Santa hat Holl had lying around, The Real Elf on the Shelf was born.

Holl says the whole stunt was a rousing success. One friend thanked him for bringing back his holiday spirit while another said her children were renaming their Elf on the Shelf Tommy, after him.

"It was a fun thing, but I didn't really think anything of it," Holl said.

Holl is back as the Real Elf on the Shelf this year, despite a trying last few months of 2013 that culminated in losing his pinky to cancer a little over a month ago. It all started with what he thought was a blister or callus on his pinky, something he can remember noticing when taking off his Lacrosse gloves in high school.

"I remember just looking down and I had this little thing," Holl said. "And I thought 'oh it's just like a sports thing, I'm just gonna have it unless I really get it looked at.' So I let it go. It didn't hurt, it didn't feel like anything. It was kind of flesh colored. I've probably had one friend notice it over the years... In the last year I started picking at it and I made it worse, which is probably the best thing I did."

Prompted by his mother, Holl went to a plastic surgeon who removed the offensive callus and diagnosed it as a venous hemangioma, which is like a grouping of blood vessels. As a part of routine procedure, however, a biopsy is always taken. A week later when Holl was in having stitches removed, the doctor took him aside and delivered the bad news: he had cancer.

Testing at Rush University Medical Center revealed the diagnosis to be epithelioid sarcoma, a rare, but serious form of cancer that affects only 1 of every 2.5 million people. The tumors frequently start in the extremities -- like fingers and toes -- and because treatments like radiation are too harsh on these parts of our bodies, the only really successful treatment is amputation.

"All this is new to me, I've never had more than the flu," Holl said, knocking on wood. "I've never had stitches, never broken a bone... I think I was more in shock then because he started using words like serious and rare."

A second opinion at the University of Chicago Medical Center confirmed the diagnosis and treatment of amputating Holl's affected pinky. That week was the same as Sidetrack's annual Night of 100 Drag Queens, in which Holl was participating for the very first time. He remembers how surreal it felt, especially with only a few friends aware of his recent life news.

The next day, a friend connected him with Imerman Angels, who provide free one-on-one cancer support by connecting cancer fighters, survivors and caregivers. The 30-year-old woman in Santa Barbara he was connected with was diagnosed at the age of 11 and lost her pinky toes. Holl found support within his everyday life as well, as friends, family members and even family members of friends who were cancer survivors began reaching out to share their stories and strength. Additionally, Holl's experience prompted a friend of his to reach out and seek help with a healthcare problem he had been putting off.

"I was watching a Upworthy video of a lesbian at a TED talk and she was talking about coming out of The Closet, but how that can mean different things for different people," Holl said. "It could be talking about finances or telling someone you cheated on them or with cancer -- and she said that."

"It can be a hard conversation to have and you don't know why sometimes," he continued. "Because you feel like you can open up to anybody and ask for help, but I've learned that its so easy to isolate yourself and not ask for help and at the same time you're putting yourself more at risk."

The surgery itself took place on November 7 and was a 14-hour affair that made Holl glad his family is so close. A biopsy soon showed that it was a success and Holl was officially cancer-free.

He's currently wearing a compression bandage to help with the swelling and goes to physical therapy twice a week where he works with machines and does exercises to help him adapt to everyday situations like making a balled fist. Despite his clean status, however, he will continue to be monitored for the next 10 years.

"Now I'm just on the mend and just a little bit lighter," Holl laughs. "People ask me how I got through it: you have to have humor. We're not calling it a nub. It's a minion, a tater tot or a nugget."

When the holiday season rolled around, Holl began hearing from friends requesting a return appearance of the Real Elf on the Shelf, and so he acquiesced and did another photo shoot. He ran into Fausto Fernos and Marc Felion, hosts of the popular Feast of Fun podcast and friends of Holl's for nearly a decade, at Sidetrack for the marriage equality bill signing, and the duo invited him to be a guest on their podcast, which Holl graciously accepted.

After a successful first appearance in which Holl talked, among other things, about meeting Mayor Rahm Emanuel, who also lost part of his finger, at an LGBT fundraiser and commenting "I guess I can run for mayor now too," the Feast of Fun boys asked him back for an additional show, recorded in early December. Watch for the premiere at feastoffun.com.

The Real Elf on the Shelf also made an appearance at this year's Santa Speedo Run where he and a very sexy Mr. Claus sold photographs to help raise money for the Center on Halsted.

"People just loved it and they had a good time," Holl said. "The holidays get so overwhelming and stressful that sometimes people lose the Christmas spirit and forget to enjoy it like they used to."

Holl was at the WGN offices last week when he casually mentioned the Real Elf on the Shelf and before he knew it, a producer was asking if he had material ("of course," he ad libbed) and booking him for Paul Konrad's Courtesy Desk on the morning of December 17. Despite a problem with the lights, the appearance that's won him a lot of attention and positive praise. He even managed to get a laugh out of Konrad when he joked "don't light the fireplace because that's how Santa gets down. That's where that song came from: 'chestnuts roasting on an open fire.'"

While many friends are asking if Holl intends to make something out of this, he insists that he's just in it for fun. One thing Holl says about cancer is that it really takes you out of your daily life, to the point where sometimes you need to remember to do normal everyday things, like see a movie or have lunch with a friend. With Christmas, he says, it's important to remind yourself that it's the most wonderful time of the year, not the time for pulling your hair out over travel arrangements and material concerns.

"The holidays always get so overwhelming and stressful that it becomes an obligation and not an enjoyment," Hall said. "Remember when you were little and you were like 'yay' and excited to all gather around the tree?... The world could use a little more of that -- more pleases and thank you... more cheer."

For more on the Real Elf on the Shelf, check out his Facebook page.

Watch: Tommy Holl as the Real Elf on the Shelf appearing on WGN Morning News