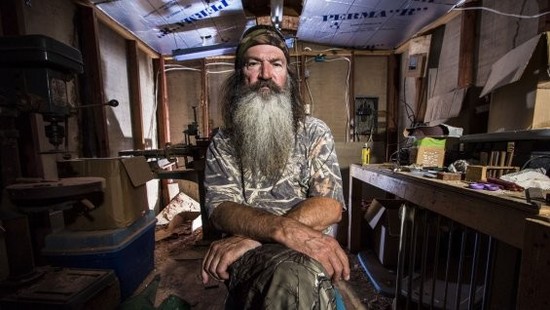 An op-ed from Bishop Carlton Pearson

Phil Robertson, a star of A&E's "Duck Dynasty," a reality show that commands up to 10 million viewers a week, has been suspended indefinitely after slamming gays and speaking condescendingly about African Americans in a magazine interview. He said he felt his calling was to lead people to Jesus and in effect keep a strong witness.

Asked what, in his mind, is sinful, Robertson replied: "Start with homosexual behavior and just morph out from there: bestiality, sleeping around with this woman and that woman and those men."

He also made comments regarding race and growing up in Louisiana before the civil rights era.

"I never, with my eyes, saw the mistreatment of any black person. Not once. Where we lived was all farmers. The blacks worked for the farmers. I hoed cotton with them. I'm with the blacks, because we're white trash. We're going across the field. ...They're singing and happy. I never heard one of them, one black person, say, 'I tell you what: These doggone white people' --not a word!

"Pre-entitlement, pre-welfare, you say: Were they happy? They were godly; they were happy; no one was singing the blues," GQ quotes Robertson as saying.

Unfortunately Mr. Robertson, in his comments, reflects the narrow-minded view and scriptural interpretation (misinterpretation) of millions of bible toting and Jesus worshiping Americans who are wrestling with 1500 to 2000 years of entrenched indoctrination. This fundamentalist view perceives God as little less than an abusive father who is prone to random and violent temper tantrums manifested in and as storms, natural disasters, earthquakes, cancer, AIDS, etc.

They see the bible as a list of rules and regulations that people must carefully study and follow to the letter (literal) in order to appease this angry God or please an extraordinarily difficult one. They tend to believe that one needs Jesus to basically protect them from that God or his judgment and wrath.

These type people have very strong faith in their god and in their often narrow and out of touch interpretation of this very ancient and primitive document, that they call the inspired word of God. I do not believe it is the inspired word of God, but the perhaps the inspired word of man or some men about their particular perception of god and that most of their so-called inspired word has now expired and is less relevant, if at all, to modern culture. That same "word of God," Bible or Scripture says: "people are destroyed for lack of knowledge", notice it didn't say for lack of faith. They all have faith (mostly in their fears or that which they fear most... .God). They believe a lot and seem to know very little with regard to what really counts in this world and in the human race. Fear and ignorance accompanied by over certitude and arrogance is a toxic combination as dangerously destructive as any nuclear bomb, something many of them would eagerly use to destroy those they feel are enemies of God or their god.

I consider myself a man or person of faith and I understand the extreme position of many who call and/or consider themselves people of faith; I just don't agree with them or it as being a position Jesus had or would have today. This same mentality was held by the extreme religious fundamentalists of his day and led to his execution by the Roman Government.

I take the bible seriously, just not always literally. Fear and paranoia, particularly in the area of sexual repression, shows that what you make the issue, you make the idol and that what you fight, you often ignite and invite into your life or reality. This may be one of the reasons same- gender loving people, marriage equality and/or gay rights issues seem to be on the rise as well as the place and space of millions of African Americans and other ethnic groups in modern times. This is indeed a new day and humans the world over are finding new ways of being and bonding culturally and societally.

My Fundamentalist friends tend to be nearly as paranoid about human sexuality as they are about homosexuality. There seems to be a pre-occupation with it both in scripture and throughout history. Sexual appetites, like other human appetites, aren't going away. Managing our appetites is an ongoing human challenge, charge and discipline, including the appetites for revenge and placating anger, ego and self-centeredness.

I'd be happy to engage in this conversation regarding this delicate but important issue. There is so much more to be said of this. Visit bishoppearson.com for more.

Carlton Pearson: A voice of reason in a world of extremes

Founder, CEO and Spiritual Director of New Dimensions Chicago, a multi- cultural and radically Inclusive "Metacostal" spiritual community that emphasizes expanded consciousness, radically inclusive love and Self- Actualization (the development of the personal Self and Soul, beyond impersonations and role playing). New Dimensions includes a cyber ministry reaching a global Internet audience of thousands. Our mission is to help create and inspire comprehensive global, planetary and cosmic peace on every level of human experience. Our purpose is to help create the conditions to make that possibility a reality by providing people with both techniques and emotional technologies to both discover and recover their divine selves. We are about renewing and re-knowing who we are as not only human beings looking for spiritual experiences, but spirits having individual as well as corporate earthly encounters.

Author of "The Gospel Of Inclusion" and "God Is Not A Christian, Nor A Jew, Muslim, Hindu... God Dwells With Us, In Us, Around Us, As Us" Recording Artist - Latest CD "Reflections After The Rain"

Editors Note: Bishop Carlton Pearson was the keynote speaker at the Oct. 22 March on Springfield for Marriage Equality.