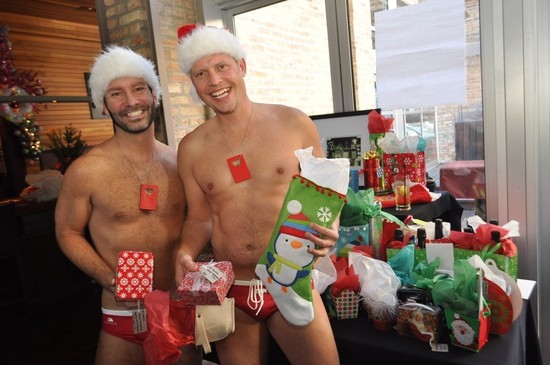 Annual event continues to grow with 220 runners, 600 participants this year

Chicago, IL - The Most Fabulous Santa Speedo Run, which held its third annual event last Saturday, December 7, is quickly becoming gay Chicago's new favorite holiday tradition. Organizer Karl Sponholtz and his partner Jeffrey Colgan outdid themselves again this year, raising more money and attracting a bigger crowd of holiday hunks than ever, despite below-freezing temperatures on the day of.

"Our goal this year was $15,000 -- we really thought we could do that realistically, but in typical Boystown fashion we knocked that number right out of the park!" Sponholtz told ChicagoPride.com. "In fact, we're still counting three days later because money is still coming in. The low estimate right now is over $21,000 -- it may be more, but that's the safe number to report for now."

This year saw 160 runners register online, with another group registering the day of the event, bringing the total to 220 runners and about 600 total at Sidetrack last Saturday. The top two fundraisers, Alexander DeHilster and David Roberts, raised $1,670 and a whopping $2,345, respectively, and were brough up on stage to be recognized and win special prizes.

"Like fine wine, this Santa Run keeps getting better every year!" Sponholtz joked.

Once again, the whole community got involved in this year's Run, with local business donating food, money and prizes to help raise money for this year's beneficiary, the Center on Halsted. The duo also introduced several changes to the Run this year, including setting up online registration and bringing on several sponsors, including Sidetrack, The Hoover-Leppen Theatre and Miller Lite, to help donate money and goodies for the door and incentive prizes as well as "Santa Sack" gift bags for all the participants.

"The Santa Sacks were a big hit this year -- we really wanted everyone to walk away with some cool stuff," Sponholtz said. "Everything in the bags was donated or provided by sponsors, so that all the money we make that day and every dollar the Santas bring in goes directly to charity."

After giving the proceeds to the Chicago-based HIV/AIDS nonprofit Vital Bridges for the first two years, this year the Center on Halsted took center stage as the beneficiary of the event. The duo was thrilled to work with this Boystown staple who helped tremendously in growing the event and connecting them with sponsors.

The Center will be the beneficiary again when the Most Fabulous Santa Speedo Run returns to Sidetrack next winter. Sponholtz and Colgan will continue to grow and perfect the Run with the goal of becoming part of the Boystown pantheon of annual events -- and if the past couple years are any indication, they'll have no problem at all.

"Anyone who ran last year and the year before is just amazed at how big the event has gotten in three short years," Sponholtz concluded. "We're trying to keep up with the event and predict what to do next. We're definitely going to improve on all aspects next year and there's still lots of room for growth."

"I can't say what's next just yet," he continued, "but I hope we continue to be on everyone's list of 'things to do in December' next year.

Check out photos of the 2013 Most Fabulous Santa Speedo Run from Anthony Meade here on ChicagoPride.com.