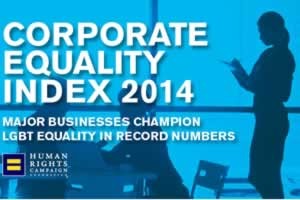 The number of companies earning top marks for how they treat their LGBT employees has increased over the last year, according to a new report released Monday by the nation's largest LGBT rights group.

HRC ranked each company on several gay, lesbian, bisexual and transgender workplace policies and assigned a rating from 0- to 100- percent.

"This will go down in history as the year that corporate support for equality left the boardroom and reached each and every corner of this country," HRC President Chad Griffin said in a statement. "Not only do fair-minded companies guarantee fair treatment to millions of LGBT employees in all 50 states, but now those same companies are fighting for full legal equality in state legislatures, in the halls of Congress and before the U.S. Supreme Court."

Verizon and Wal-Mart greatly increased their presence. Two years ago, Verizon scored only 20 percent.Wal-Mart, which recently announced it would offer benefits to the spouses of gay workers, increased from 60 to 80 percent.

The report found that more than two-thirds of Fortune 500 companies and 90 percent of all large corporations it surveyed have extended benefits to the spouses of gay workers.