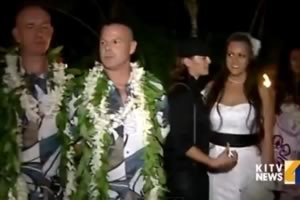 Honolulu, HI - Gay and lesbian couples in Hawaii will begin marrying at the stroke of midnight on Monday, December 2.

Three of the couples who first legalized their relationships in civil unions in 2012 will be among the six same-sex couples marrying at a midnight ceremony at the Sheraton Waikiki hotel.

More than 1,000 couples, most from overseas, have used the hotel's convenient marriage license office in the past year, KITV News reported.

"People think about if I'm going to get married or a honeymoon, why not do it in Hawaii," said Kelly Saunders, the hotel's general manager. "I think this just opens up a realm of possibilities. We're looking forward to seeing really what that future is and capitalizing on both providing an amazing experience here in Waikiki, but also the revenue that's going to generate for our properties as well as the state of Hawaii overall."

A second hotel, the Kona Sheraton, also has authorized wedding agents on its staff.

The Health Department will opens its doors at 9 AM to begin processing marriage applications.