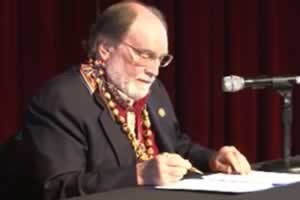 The Democratic governor signed the legislation during a signing ceremony held at the Hawaii Convention Center. Among those in attendance was Evan Wolfson, president and founder of Freedom to Marry, the nation's largest group devoted to expanding marriage rights for gay couples.

Speakers at the event included Senator Clayton Hee and Rep. Chris Lee, who championed the bill in their respective chambers, and Attorney General David M. Louie.

In his remarks, Abercrombie described the marriage law as "the epitome of the First Amendment in action."

"The world is about to change, right now," Abercrombie said.

Gay and lesbian couples will be able to marry in the state starting December 2. Gay couples can also marry in 14 states plus the District of Columbia. Illinois Governor Pat Quinn is expected to sign a similar bill into law on November 20.

Abercrombie signed the bill a day after it cleared the Senate with overwhelming support, 19-4 with two lawmakers excused, after nearly 2 hours of debate.

Rep. Bob McDermott warned that he would seek a court order blocking the law's start. McDermott, a Republican, argues that a 1998 voter-approved constitutional amendment giving the Hawaii Legislature the power to define marriage sets limits on legislative authority and claims that the measure prohibits lawmakers from legalizing same-sex marriage. According to The Los Angeles Times, McDermott on Thursday will ask a court for a temporary restraining order against the law.

"This is what voters were told in '98 – that marriage would be reserved to opposite-sex couples," McDermott said.