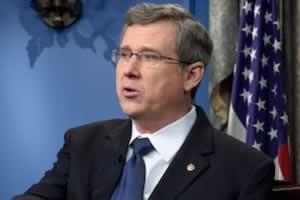 Earlier this year, Kirk became the second Republican member of the Senate to endorse marriage equality.

Kirk made his remarks after a Veterans Day medal ceremony at Buffalo Grove High School, according to the Chicago Sun-Times.

"For me, I backed it," Kirk said. "I applaud the state Legislature who just did that."

"It's pretty tough to win statewide as a Republican in Illinois," he said. "I would just urge be a moderate on the social issues."

"I would say that any statewide candidate has got to have moderate views to reflect the whole state," Kirk added. "Many times when you look at the political spectrum you'll see everything that goes way out to the extreme right, way out to the extreme left – the question the candidates have to ask themselves: 'Who represents everybody in the middle?' So you gotta represent the vast bulk of us who are not extreme right or extreme left."