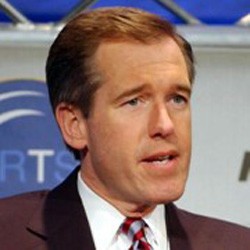 Los Angeles, CA - NBC Nightly News anchor Brian Williams upset the Gay and Lesbian Alliance Against Defamation (GLAAD) and more than a few bloggers Monday night when he opened a segment on the 60th anniversary of Queen Elizabeth II and Prince Philip by saying, "In an era when marriage is under attack, the United Kingdom is these days celebrating a 60th wedding anniversary—the longest marriage of any monarch."

After receiving several e-mails about the comment, Williams posted a response to MSNBC's blog. The anchor said he was referring to "our national divorce rate, which is currently somewhere between 40 and 50 percent," when he used the phrase often heard from anti-gay activists.

"Others took it upon themselves to decide that I was somehow attacking gay marriage," he added. "The simple fact is that nothing could have been further from my mind, as many others easily understood. In fact, one comment shared with me today came from a respected member of the National Lesbian and Gay Journalists Association, who said, ‘It seemed to me he was talking about the sky-high heterosexual divorce rates. Marriage is under attack—by straight people. It had nothing to do with the gay marriage movement.'"

GLAAD President Neil G. Giuliano sent a letter of his own to Williams yesterday, which read: "Your blog entry today confirms that your use of the phrase on last night's broadcast was not in any way intended to disparage gay couples and that expression is appreciated. However, the primary issue is whether a phrase that has been used predominantly in an ugly anti-gay context can be used in another, tangentially related context (here, marriage in a general sense) without invoking the stereotypes that imbrue its common usage.

"The phrase ‘marriage under attack'—like ‘defense of marriage,' which you use elsewhere in your blog entry—is a meme designed and used by far-right anti-gay activists to scare people into opposing legal protections for gay couples," Giuliano added. "Media professionals who talk about marriage-related issues in their reporting should simply and factually discuss them, rather than uncritically repeating rhetoric calculated to make people feel threatened by and afraid of loving, committed couples."