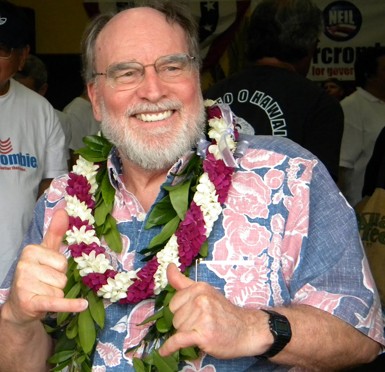 photo credit // wisconsin gazette/courtesy
Honolulu, Hawaii - The Hawaii Senate has given final approval in a special session vote on Nov. 12 to legislation that will allow same-sex couples in the state to marry beginning Dec. 2.

The Senate vote affirmed a bill amended and approved by the House earlier this month.

Democratic Gov. Neil Abercrombie called the special session and is expected to quickly sign the bill into law. Hawaii Attorney General David Louie has said the measure is constitutionally sound.

The Senate vote was 19-4, with two senators excused. More than half of the Senate spoke in favor of the bill during the debate into the afternoon.

"I want to congratulate the Hawaii State Legislature on passing legislation in support of marriage equality," President Barack Obama said in a statement released by the White House. "With today's vote, Hawaii joins a growing number of states that recognize that our gay and lesbian brothers and sisters should be treated fairly and equally under the law. Whenever freedom and equality are affirmed, our country becomes stronger. By giving loving gay and lesbian couples the right to marry if they choose, Hawaii exemplifies the values we hold dear as a nation. I've always been proud to have been born in Hawaii, and today's vote makes me even prouder. And Michelle and I extend our best wishes to all those in Hawaii whose families will now be given the security and respect they deserve."

Hawaii is the third state in just two months — and the sixth state this year — to legalize same-sex marriage. Illinois lawmakers finalized legislation earlier this month that needs only the signature of the Democratic governor.

And in October, same-sex couples began marrying in New Jersey.

But the contemporary push for marriage equality began in Hawaii in the early 1990s, with a landmark lawsuit filed by three same-sex couples who applied for marriage licenses and were denied.

Hawaii was close to fully recognizing the rights of same-sex couples to marry when voters enacted a constitutional amendment authorizing state lawmakers to pass a bill defining marriage as the union of a man and a woman.

"One of the early milestones in the freedom to marry movement was the lawsuit filed in Hawaii 23 years ago in 1991," said Marriage Equality USA legal and policy director John Lewis. "The people of Hawai'i never gave up, and their long road to equality will make the wedding bells ring a bit louder and the wedding cake taste that much sweeter when the first marriages begin in Hawaii."

Responding to the news that the Senate gave a final OK to the bill, Jennifer Pizer of Lambda Legal said, "Marriage equality has come at last to the place that first showed America what should be offered, with a smile and aloha, everywhere. Twenty years ago, the Supreme Court of Hawaii ruled that denying marriage licenses to lesbian and gay couples appeared to be sex discrimination. Today, Hawaii legislators fulfilled the promise of that first ruling and have made Hawai'i truly the Aloha State."

Lambda helped draft the legislation, said Pizer, adding, "We congratulate the tireless community leaders and allies who fought hard for its passage, and thank the steadfast elected officials and their dedicated staff who made possible this victory for love and fairness."

Evan Wolfson of the Freedom to Marry campaign, was a co-counsel on the Hawaii marriage case in the 1990s. He said in an email to supporters, "Twenty years ago, Hawaii launched the global movement for the freedom to marry. After two decades of work, it's especially sweet to write to you with the news that at last we've won the freedom to marry in the state where it all started."