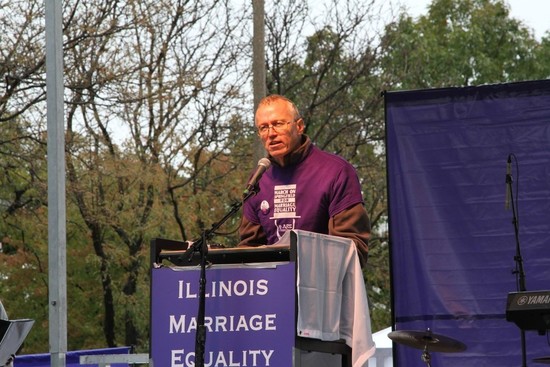 gln's andy thayer at the oct. 22 march on springfield

"Just two weeks ago this bill was widely seen as dead in the water for this fall veto session," said GLN co-founder Andy Thayer. "What changed? It was the people that forced this bill onto the agenda for this Fall Veto session, not the politicians and insiders. It was the explicit threat of political retribution to those in Springfield who stood in our way or gave only half-heartedly support to equal rights. Like with so many justice struggles before this, it was grassroots efforts that made this bill pass."

"This has been a long-fought victory," said Gay Liberation Network spokesman Bob Schwartz, one of the organizers of the event. "We have been working on this issue since long before it was popular in the LGBT community, let alone in the state at large. With this rally we will not only savor this victory, but also send the message that the fight for LGBTQ rights does not end with marriage equality in Illinois."

The victory rally begins at 7 p.m. on Thursday, Nov. 7 at the corner of Halsted and Roscoe streets in the heart of Chicago's LGBT entertainment district.

Sidetrack, 3349 N. Halsted, is hosting a "Hero's Welcome Party" at 8 p.m. on Thursday, Nov. 7. The program will feature leading supporters of the marriage equality bill, including the two legislative sponsors, state Rep. Greg Harris (D-Chicago) and state Sen. Heather Steans (D-Chicago). The event is hosted by Sidetrack and Equality Illinois

The Illinois House approved Senate Bill 10 on Tuesday by a 61-54 vote. The Senate easily approved the measure an hour later during a procedural vote. With Gov. Pat Quinn's signature, Illinois will become the 15th state to allow same-sex marriages.