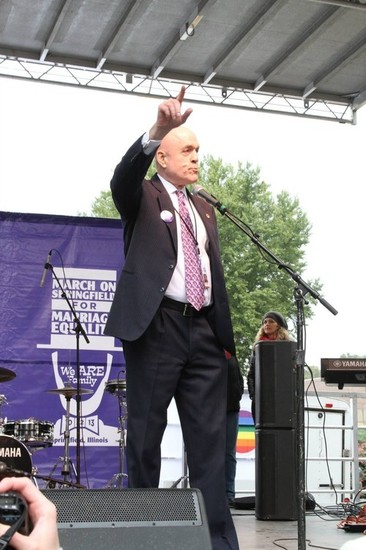 Springfield, IL - As Illinois lawmakers return to the Capitol on Tuesday for the final week of the fall veto session, marriage rights advocates are ready for a vote on a stalled marriage bill.

Senate Bill 10, the Religious Freedom and Marriage Fairness Act cleared the Illinois Senate on February 14, but stalled in the House on May 31 when its chief sponsor, state Rep. Greg Harris, announced that he would not be calling the measure.

"Several of my colleagues have indicated that they would not be willing to cast a vote on this bill today. I apologize to the families who were hoping to wake up tomorrow as full and equal citizens of this state," Harris said from the floor of the House on May 31. "They have asked for time to go back to their districts, talk to their constituents, and reach out to their minds and hearts, and have told me they will return in November with their word that they are prepared to support this legislation, and I take my colleagues at their word that they shall."

Nearly five months have passed and Harris has not committed to a vote during the veto session ending Nov. 7, which could push a marriage vote to 2014.

"This is the week to call and pass the marriage bill," Equality Illinois CEO Bernard Cherkasov told ChicagoPride.com. "Lawmakers had asked to delay until November so that they consult with their constituents about the importance of marriage equality. And now they are coming back for the last days of veto session."

Cherkasov said the momentum since May 31 favors equal marriage as new co-sponsors have been added to the marriage bill and additional support from lawmakers has been secured.

A poll released last month by Equality Illinois shows a clear majority of Illinois voters support the legislation with significant majorities among African-Americans and Catholics.

The House convenes at noon Tuesday and is scheduled to meet through Thursday. Gay rights advocacy groups, including Equality Illinois, continue to meet with Harris and other legislative allies, but it is Harris who ultimately decides when the bill is called.

Veteran gay rights activist Rick Garcia told ChicagoPride.com that Harris should only call the measure when the votes are there.

"I have been firm that it should not be called unless we have the votes," said Garcia, policy director for The Civil Rights Agenda. "That is not a popular position now, but in my twenty years of passing pro-LGBT legislation in Illinois that is how I have always operated. I might be convinced at some point that calling the vote no matter what is a good strategy, but I don't see it now."

Garcia, who continues his work from Springfield, acknowledged the measure has secured additional support and said he remains hopeful a vote will happen this week.

"The primary reason to get this done is justice delayed, justice denied," added Garcia. "Couples need the legal protections that marriage conveys."

Update: Multiple sources confirm to ChicagoPride.com that Harris is expected to call the bill on Tuesday.

"It looks like today is the day," Anthony Martinez, executive director of The Civil Rights Agenda, told ChicagoPride.com on Tuesday afternoon.

Harris today filed two amendments to SB 10. The 2nd amendment changes the effective date to June 1, 2014, which means the measure would now only need 60 votes to pass in the House, but also requiring the Senate's re-approval.