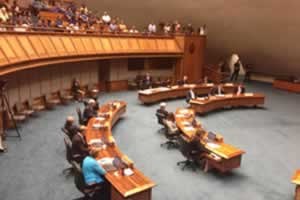 Honolulu, HI - The Hawaii Senate on Wednesday approved a bill which seeks to make Hawaii the 15th state to legalize gay marriage.

Senators approved the measure with a 20-4 vote and sent it to the House.

The White House released a statement applauding the action.

"While the president does not weigh in on every measure being considered by state legislatures, he believes in treating everyone fairly and equally, with dignity and respect," Shin Inouye, a White House spokesman, said in an email to the Human Rights Campaign (HRC), the nation's largest LGBT rights advocate. "As he has said, his personal view is that it's wrong to prevent couples who are in loving, committed relationships, and want to marry, from doing so. The president would welcome a decision by the state Legislature to treat all Hawaiian couples equally."

House leaders have scheduled hearings on the marriage measure for Thursday morning.

Support in the House is more divided, but a recent vote count by Hawaii News Now listed 27 House members in support of the measure, one vote more than needed to clear the chamber.

Governor Neil Abercrombie, a Democrat, has pledged to sign the marriage bill if it is approved by lawmakers.