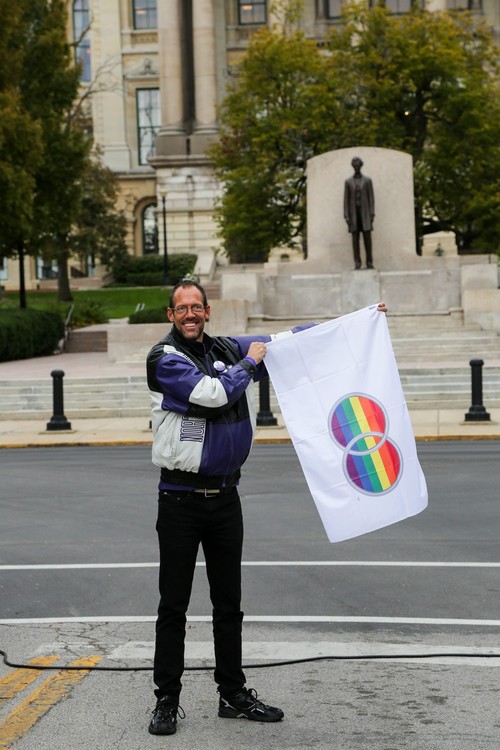 WATCH: March on Springfield for Marriage Equality (below)

Springfield, IL - Last Tuesday, thousands of people braved the cold rain to rally outside the Illinois state Capitol as part of the March on Springfield for Marriage Equality, setting a record as the largest ever LGBT focused rally or lobby day in Springfield.

"A majority of Illinoisans support equal marriage," said Tracy Baim, co-chair of the March on Springfield, "because they understand that treating everyone equally is fair. The March on Springfield was a positive and uplifting showcase of the best of Illinois, with speakers and performers showing how love, faith, family and equality are at the core of the equal marriage movement."

The March was part of a broad grassroots strategy to secure final passage of Senate Bill 10, the Religious Freedom and Marriage Fairness Act, during the fall veto session.

"On behalf of the March on Springfield organizers and the almost 5,000 people who joined us October 22," said Kevin Boyer, co-chair of the March on Springfield, "we urge the Illinois House of Representatives to pass SB 10, the 'Religious Freedom and Marriage Fairness Act,' without delay. Seize this historical moment to put Illinois on the right side of history with a vote for fairness, equality, justice and love."

Organizers reported more than 5,000 people participated. Media reports noted several thousand and Springfield police estimated at least 3,000 people were there. The crowd chanted slogans such as "Pass the damn bill."

Marriage rights advocates remain cautiously optimistic that SB 10 will be called during the fall veto session. Illinois lawmakers return for another three-day session on Nov. 3.


The roster of speakers for the March on Springfield represented the breadth and depth of the equal marriage coalition in Illinois.