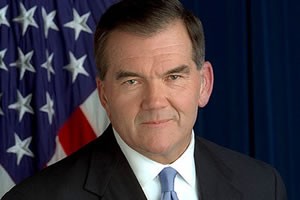 In comments to BuzzFeed before his address, Ridge, a Republican and a former governor of Pennsylvania, explained his reversal on marriage equality.

"Life, politics and government is a journey, and our positions on issues as you go along that journey may become more fully embedded or, because of circumstances or other changes, they can change. As you know, when I was governor, I signed [Pennsylvania's] Defense of Marriage Act. Since that time, frankly, my point of view has evolved."

Ridge went on to chide Republicans who dwell on social issues.

To win national elections Republicans need to "be a more positive and compelling force for change in the 21st Century. You can't change government unless you win elections. Our roots are conservative, but we should be far less – not even far less – we oughtta quit being judgmental."

"You may not agree with me on some of these social issues," Ridge said of Republicans, "but I want you to respect them and don't make them the centerpiece of your political agenda. They shouldn't be there, in my judgment."