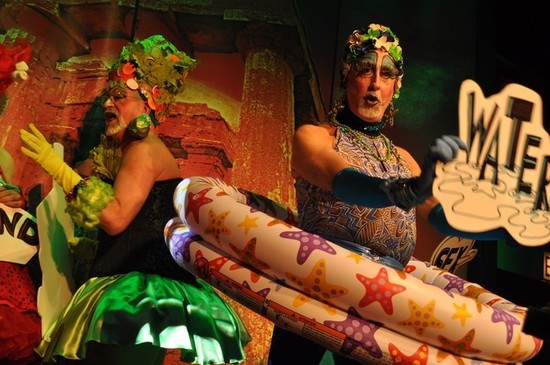 Chicago, IL - Once a year around Halloween, the popular Boystown bar Sidetrack trades in its video bar identity to produce a truly fabulous and unique performance. The 21st annual Night of 100 Drag Queens returns Wednesday, Oct. 23, and Thursday the 24 for "100 Shades of Drag," a two-night extravaganza of color, glitter and music presented on two stages, all benefiting Equality Illinois.

"This event is just an extravaganza -- staging, lights, backdrops, glitter everywhere," Chuck Hyde, manager and partner at Sidetrack Bar, told ChicagoPride.com. "We have been know to thrown some major parties: Halloween, Mardi Gras, NYE, and this is one of them. Yet this one is unique, because we break from our video format for a while and produce an amazing show."

"This is our way of really turning it out and having a fun, philanthropic event around Halloween," he continued. "It's really the only time of the year we get to kick up our heels, literally."

Night of 100 Drag Queens began over two decades ago as a fun birthday party for then Gay Chicago Magazine columnist Rick Karlin, who today is the editor of Boi Magazine and a contributor for ChicagoPride.com. Over the years it has grown from a single night, single stage event to its current format of two simultaneous stages over the course of two nights, featuring both amateur and professional drag performers, as well as their hot male backup dancers.

The event has had some hilariously talented hosts over the years, including Rick Karlin, Honey West, Dominic Hamilton Little, Teri Yaki and Missex, who has hosted for the last nine years. This year she will be joined by co-host Debbie Fox.

"What has remained constant throughout is that we don't take ourselves too seriously -- we keep it light and silly," Hyde said.

If you've never been before, expect a three hour show comprised of roughly 32 acts taking place on two stages set up in Sidetrack. With about 40 performing drag queens, plus the 10-15 staff members decked out and a crowd encouraged to dress up as well, the bar ends up packed with something like 100 drag queens in one room.

This year's theme plays off the sexiness of "50 Shades of Grey," throwing a different angle on it by adding colors, so Hyde says they challenged their performers to come up with hot, sexy and brightly colorful routines. Expect an array of vibrant color schemes as the MCs take us through a whole spectrum of drag -- colors, music, outfits and more.

After months of rehearsals with the queens and sexy boys backing them up, this is a production you don't want to miss.

"This a meticulously coordinated show with a team of lighting people, audio and video techs, camera operators and directors, makeup artists, hairstylists, wardrobe assistants, drag queen wranglers and stage hands," Hyde said. "It takes a village (or the Village People) to run this show."

The 21st Annual Night of 100 Drag Queens will begin at 8:30 p.m. on Wednesday October 23 and Thursday October 24 with two tiers of tickets available for both nights. General Admission tickets for $15 apiece gain showgoers access when the doors open at 8 p.m. VIP tickets get you in at 7 p.m. for an hour reception including some champagne, a teaser performance or two and a chance to get preferred seating (though with cameras on each stage, Hyde says anywhere in the bar ends up being a great seat for the show). VIP tickets are available for $20 per person in advance or $25 at the door.

"They are champions in our community and we support them every way we can," Hyde said. "We encourage everyone to do the same and this is one way you can help...come to the show, sit back, giggle a little and let out your own inner drag queen for a while."

More information, including a list of the performers and links to buy tickets, is available online.