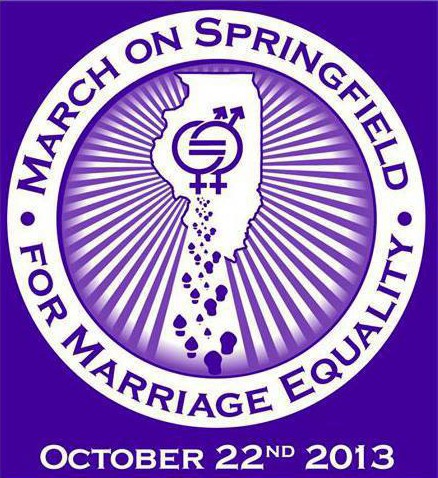 Chicago, IL - The roster of speakers, which represents the breadth and depth of the equal marriage coalition in Illinois, has been announced for the March on Springfield for Marriage Equality on Tuesday, Oct. 22, the scheduled first day of the fall veto session of the Illinois state legislature.

"We march on Springfield to make sure that the voices of people from all over our state are heard loud and clear," the 13 co-chairs of the March on Springfield said in a joint statement. "It is time for Illinois to treat all of its citizens equally, regardless of sexual orientation or gender, and we call on the Illinois House of Representatives to pass Senate Bill 10, the Religious Freedom and Marriage Fairness Act, during the fall veto session."

Families, couples and LGBT youth from groups that are part of the Illinois Unites coalition for equal marriage will also tell their personal stories to the thousands gathered for the March. The coalition, formed by Equality Illinois, Lambda Legal, the ACLU, and The Civil Rights Agenda and almost 100 other organizations, is led by John Kohlhepp who will also speak at the rally.

More than three dozen elected leaders from state and local government who support marriage equality will be introduced at the rally by Kevin Boyer and Kim Hunt, co-chairs of the March on Springfield.

The March on Springfield rally will take place from 1 to 2:30 pm. It will be preceded by Rock The March – a free one-hour concert featuring top LGBT talent with Illinois roots. At the rally's conclusion, Illinois families will lead the attendees on a march around the State Capitol.

The concept for the March itself was born after the non-vote on Illinois' marriage equality bill this past May when Baim, founder and publisher of the Windy City Times, wrote an editorial expounding on the needs for a march and rally in Springfield. She reached out to 12 other individuals to become co-chairs and built support amongst LGBT and allied organizations to help organize a march for marriage equality on the first day of the fall veto session.

"I realized that a lot of the efforts were more behind the scenes, or not as visible, and I wanted to create an outlet for the anger, and the pride, of people fighting for this issue," Baim told ChicagoPride.com.