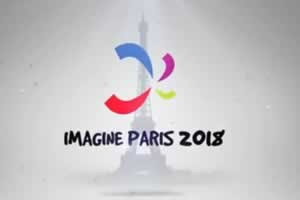 Paris, France will host the 2018 Gay Games, officials announced Monday night at a press conference in Cleveland, Ohio, site of the games' ninth iteration to take place next summer.

Three cities competed for the opportunity to host the Olympic-style sporting event estimated to be worth $60 million in economic impact: Paris, Limerick and London.

Cleveland Mayor Frank Jackson was given the honor of announcing the winner.

Jackson opened a sealed envelope, then said, "It is Paris."

The win comes just months after France approved a gay marriage law. Debate over the bill spilled out into the streets of Paris, where tens of thousands protested for and against the measure.

Paris' Deputy Mayor Philippe Ducloux said that "for all Parisians, it will be an honor to welcome the 10th Gay Games. All participants will be welcome."

Cologne, Germany last played host to the games in 2010.