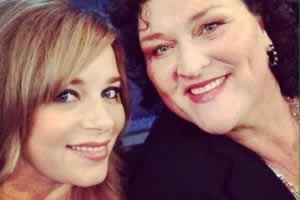 Hollywood, CA - Dot-Marie Jones, who plays coach Shannon Beiste on the Fox musical-comedy Glee, got engaged to her girlfriend, Bridgett Casteen, on Friday.

According to gay glossy The Advocate, Jones proposed to Casteen, 39, at Disneyland Resort in Anaheim as the park celebrated its annual Anaheim Gay Days.

"It's the happiest day of my life," Jones, 49, told the magazine. "I never thought I'd find somebody that is loving and kind."

"SO HAPPY!!" she messaged on Twitter along with a photo of the pair.

Jones first discussed her engagement during a Q&A session with Eddie Shapiro, a co-founder of Anaheim Gay Days, held Friday inside Disney's Grand California Hotel. Jones substituted for Tabatha Coffey, the star of cabler Bravo's Tabatha Takes Over, who canceled at the last minute due to an illness.

Jones said that she proposed to Casteen, who has three children from a previous relationship, near the park's Sleeping Beauty Castle.

Jones has been nominated three times for an Emmy for her role on Glee.