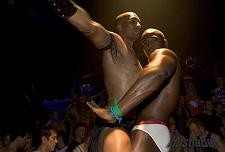 The brainchild of former escort and Rentboy.com co-founder, Tom Weise and his business partner, Jeffrey Davids, Hustlaball is today a red hot international series of circuit events that bring together (in addition to the usual suspects) top name musical talent and DJ's, an outrageous cast of fetish acts and performers and a growing international parade of party people anxious to get in on the triple x-rated fun for which Hustlaball has become notorious.

This year Hustlaball's debauched version of the underworld party will blow into New York City from Sept. 7 – 10, with events scheduled at numerous Manhattan venues, and then touch down in Berlin, from Oct. 19 – 21, where many activities will take place at the world famous Kit Kat Club.

Sadly the 2007 Hustlaball events will be the last for event creator Tom Weise, who recently announced that he is moving to Paris and resigning from his post at Rentboy.com for what he described in a press release as ‘strictly personal' reasons about which he is very happy.

"I am proud to say that as a political activist I was able to continue my work with all my heart in a country that is deeply rooted in prudery and has never legalized prostitution, unlike other more liberal nations have (Germany, Denmark, The Netherlands, etc.)," Weise offered on the eve of his departure from Rentboy.com and the kick–off of the 2007 Hustlaball season.

"With Rentboy.com I was also giving male prostitutes a safer life and lobby to work. In 1997 most rentboys were called hookers or hustlers and in New York you would mostly find them in shabby bars, clubs, the street and institutions like Stella's, the Gaiety, the Eros Theater, places of life that are long gone due to harsh city administrations." Weise continued.

With that in mind, Weise's departure will surely add an air of nostalgia to this year's Hustlaball events. After all, before him there was not only no Rentboy.com, there was no Hustlaball, which suggests that this year's parties will give new meaning to phrase ‘going out with a bang" as all those in attendance pay homage in the way they know best to one of the men who responsible for bringing hustlers (and other ‘scandalous sorts') to the ball in the first place.