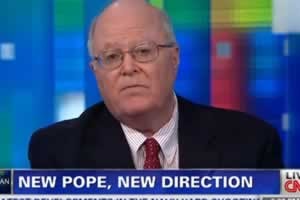 Bill Donohue, president of the Catholic League, doesn't believe there is much change in Pope Francis' recent remarks on gay marriage.

Donohue appeared on a Piers Morgan Live panel to discuss Francis' call for the Catholic Church to pay less attention to its rules on abortion, same-sex marriage and contraception.

"We have to find a new balance; otherwise even the moral edifice of the church is likely to fall like a house of cards, losing the freshness and fragrance of the Gospel," Francis said.

Father Albert Cutie, the author of Dilemma, said that the pope was clearly speaking to social conservatives inside the church.

"One of the things that I see is that today in America all of these groups that have been for, I would say, more than 2 decades pushing the constant issue of contraception, the evils of contraception, the whole abortion issue, the attitudes that are sometimes so negative toward homosexual persons and their acts, today they must be worried," Cutie said. "Because this pope is telling them, 'You know what? Stop it. You know, let's focus on the gospel.Let's focus on welcoming loving people. And let's help them through the process of whatever it is they have to deal with.' And that's one thing that the pope has not said in the past. And if someone tells me that what this pope is saying is not something new, they haven't been paying attention for a long time."