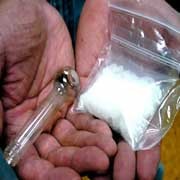 More than half a million young adults reported use in the past year of crystal meth in 2001-2002, according to a new nationally representative study. That estimate is higher than previous studies and represents nearly 3 percent of the U.S. population.

Among meth users, there is a strong link to alcohol and other drug use, the study found. Additionally, the findings, published in the journal Addiction, indicate crystal methamphetamine users were more likely to be male, poor, living in the West, and not employed or in school. Hispanics and blacks were less likely to use meth than whites. Yet odds of meth use among Native Americans was four times higher than for whites.

"We also found that among both women and men, crystal meth users were more likely to be involved in risk-taking and antisocial behaviors such as selling drugs and engaging in violent behavior," said Bonita Iritani, study author and Associate Research Scientist at PIRE's Chapel Hill Center.

"Sexual risk taking including having more than one sex partner, not having safe sex, and having regretted a sexual situation due to alcohol or drug use also was more prevalent among meth users."

Additionally, about 16 percent of reported meth users had their own child living in their home. The study used data from the National Longitudinal Study of Adolescent Health or Add Health, which interviewed youth in 7th-12th grade and then re interviewed them at two later points.

Researchers used data from one wave of that study-when the participants were interviewed as young adults, ages 18-26, in 2001-2002. The study examined the crystal methamphetamine use of approximately 14,000 respondents, characteristics associated with its use, and relationships between crystal methamphetamine use and risky and antisocial behaviors. The National Institute on Drug Abuse or NIDA funded the research. "Interestingly, we also found that men who reported using meth were more likely to have a father who had ever been incarcerated," Iritani said.

"Crystal meth users were more likely to smoke cigarettes, use marijuana, and use cocaine, and to drink alcohol more frequently compared to those who had not used crystal meth. Other research is needed about how meth use is related to addiction of other substances."