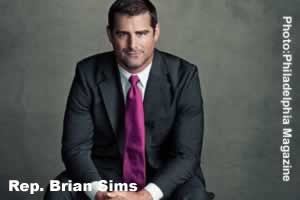 Philadelphia, PA - Pennsylvania state Rep. Brian Sims announced Tuesday that he would back a bill in the House that seeks to ban therapies which attempt to alter a minor's sexual orientation from gay to straight.

"This isn't about Republicans or Democrats," said Sims, an openly gay Democrat from Philadelphia. "This isn't about civil rights so much as it is about medicine and about data. And what we know is that this is quack science."

"Almost four decades of science and medicine that says if you are LGBTQ, just like me, that there is nothing wrong with you, that you are not broken, you don't need to be fixed and you don't need to have a diagnosis, and that being LGBT, like so many other characteristics in your life, some days will be a blessing and some days will be a burden, but is not something that needs to be fixed or can be fixed and you are just fine the you are," Sims told reporters during a press conference announcing the pending House bill, Metro reported.

Sims was joined Tuesday by Senator Anthony Williams, who introduced a companion bill in the Senate in April.

"I am not of gay descent, but trust me, I understand what it means to be an outcast," said Williams, an African-American Democrat.