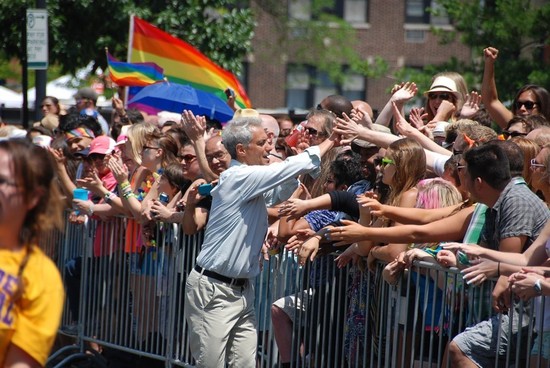 Chicago, IL - Responding to a recently announced advertising campaign by the City of Minneapolis aimed at attracting same-sex Chicago couples seeking the freedom to marry, political leaders and tourism officials today urged the Illinois House of Representatives to pass marriage equality legislation to protect tourism and related industries in the state.

"Thirteen states have extended marriage to all loving, committed couples – but Illinois has not. That is bad for Chicago, bad for Illinois, and bad for our local economy and the jobs it creates," said Mayor Rahm Emanuel. "Our robust tourism and hospitality industries will thrive most fully when our state hangs out the 'welcome' sign for everybody."

The new ad campaign, sponsored by Minneapolis' convention and visitors' association, encourages gay and lesbian Chicagoans to make the short trip to Minneapolis to marry, where marriage equality has been in effect since August 1.

Minneapolis Mayor R.T. Rybak, a long-standing advocate for the freedom for all couples to marry, strongly encourages Illinois lawmakers and Governor Pat Quinn to pass marriage equality in Illinois — but until they do, he wants same-sex Chicago and Illinois couples to marry in Minneapolis.

"The failure of the Illinois House of Representatives to enact marriage equality not only costs people their rights but also has an economic cost," Governor Quinn said in a statement released today by Illinois Unites for Marriage, a coalition supporting the freedom to marry. "Illinois has long been a leader in embracing all people, and we must continue to fight until marriage equality is law."

A recent study by the UCLA School of Law's Williams Institute found that marriage equality would be an economic boon to Illinois. In the first three years, the state's wedding business would increase by $74 million, generate $29 million in tourism expenditures by out-of-town guests, raise total state and local tax revenue by $8.5 million, and create approximately 281 jobs, according to the study.

"Just as Chicago is seeing record tourism and the millions of dollars in economic impact it brings, the failure of the legislature in Springfield to pass a marriage equality bill is taking a real toll on our local tourism, lodging and wedding-related industries," said Desiree Rogers, Chair of Choose Chicago. "The only way Chicago will stay competitive is to take a stand for equality -- a win-win for our residents and local businesses."

The Religious Freedom and Marriage Fairness Act cleared the Illinois Senate on February 14, but stalled in the House on May 31. Gay rights advocates and allies hope to get same-sex marriage legislation passed this fall when lawmakers return to Springfield for their annual veto session.

Information from a news release by Illinois Unites for Marriage