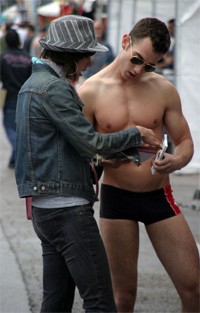 Now in its 5th year, Pride Fest included an eclectic lineup of arts & crafts, food and other vendors situated along Halsted Street from Waveland to Grace in Chicago's Boystown neighborhood.

The annual Pride Fest is a prelude to the pride parade on Sunday. The 38th Annual Chicago Pride Parade begins at Noon stepping off from the Halsted/Belmont corner, proceeding north on Halsted (to Broadway); then south on Broadway (to Diversey); then east on Diversey (to Cannon Drive).

Local performers, including the Chicago Gay Men's Chorus, R.O.T.C., and Shamelessboyzz, performed on the community stage. Kathy Sledge from the legendary Sister Sledge was the events headliner while Miss Foozie served as host between the two entertainment stages.

Pride Fest is hosted by and benefits the Northalsted Area Merchants Association, the same group behind the popular Northalsted Market Days, scheduled for the weekend of August 11 – 12.