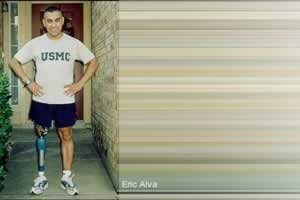 San Antonio, TX - Eric Alva, a gay Marine veteran who lost a leg during combat in the Iraq War, was booed last week as he testified in support of a gay-inclusive anti-discrimination ordinance in San Antonio, Texas.

"I told people how I lost my leg and fought for the rights and freedoms of the people in our country, not just those who were sitting there with their bibles and their crosses in opposition to the ordinance," Alva told BuzzFeed.com. "Without this ordinance I can be denied from applying for a job or thrown out of an establishment, regardless of [whether] I'm a purple heart recipient or a wounded warrior. As soon as I said that the crowd started booing me."

"To all you people that preach the word of God, shame on you because God loves me, like the day I laid bleeding on the sands of Iraq," Alva told the crowd. "And that's why he save me!"

According to the San Antonio-News, roughly 300 opponents of the measure demonstrated outside city hall ahead of the hearing.

"We need our prayers to touch our council members," Pastor Charles Flowers told the crowd. "Let them vote 'no' to this ordinance, and 'yes' to the reign of the kingdom of God."

The ordinance became a hot button issue after Christian conservatives on talk radio and the Internet claimed that it would discriminate against Christians who are opposed to same-sex unions.

Councilwoman Elisa Chan, a Republican, also created controversy when an audio recording of her describing gays as "disgusting" surfaced on Thursday.