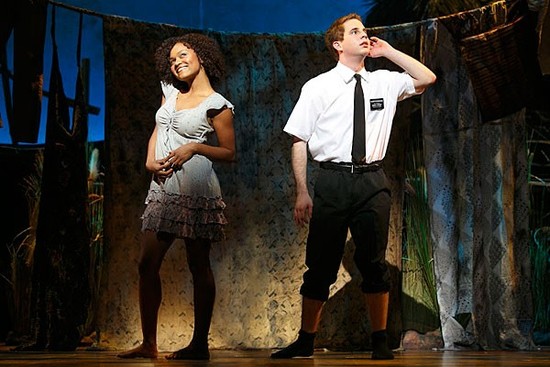 photo credit // joan marcus
Chicago, IL - After being accepted at New York's Columbia University two years ago, actor Ben Platt was forced to defer his college career – not once, but twice. Fortunately, he's been skipping school for all the right reasons.

In fall of 2011, the Los Angeles-born performer was Columbia-bound when Hollywood came calling. Platt was awarded the role of nerdy, "Star Wars"-obsessed Benji Applebaum in the Universal film "Pitch Perfect," starring opposite Anna Kendrick and Rebel Wilson. By all accounts, his performance was a hit.

In fall 2012, Platt once again postponed his education to re-manifest his inner geek, picking up the role of nerdy, "Star Wars"-obsessed Elder Cunningham in the Chicago production of "The Book of Mormon." The gig has made the 19-year-old actor a star in one of the hottest shows in Chicago.

"'The Book of Mormon' is the story about perhaps the most perfect Mormon, played by Nic Rouleau, paired with the most screwed-up, weird Mormon, which I play," says Platt. "I didn't have to do too much research for the part."

In the story, Elder Price (Rouleau) and Elder Cunningham (Platt), two eager Mormon missionaries, are assigned to save sinners in Uganda, a cynical population that does not believe the Mormon god or anyone else can ease their struggles. While Elder Price fails, Elder Cunningham succeeds by preaching his own brand of Mormon theology, one that borrows heavily from "Star Wars," "The Lord of the Rings" and other pop fantasy works. To non-believers, those stories sound no less plausible than the Book of Mormon.

As a man-child adrift in a not-so-promising land, Platt delivers a delightfully lunatic performance. Josh Gad, who earned a Tony nomination for his portrayal of Elder Cunningham on Broadway, used his ample girth as a comedic device to separate his character from the other elders. Platt's trim frame does not afford that opportunity, so he created his own brand of crazy to make his character stand out from the other Mormon elders.

"My character is inappropriate, wants to be everyone's best friend and says wrong things at wrong times," Platt says. "He is more than a little ADD and doesn't know when to stop talking, but he has the best intentions."

Originally from L.A.'s Westwood neighborhood, Platt is the son of theatrical and film producer Marc Platt, perhaps best known as the producer of Broadway's "Wicked."

Platt has been acting on stage since he was eight years old, making him more seasoned than many of his contemporaries. He appeared in Tony Kushner's "Caroline, or Change" and "Irma La Douce" opposite Katie Holmes. "Pitch Perfect" was his first major film, and it presented a host of different challenges from his stage work.

"I'd been brought up on stage, and I'll never love anything as much as I love stage, but I enjoyed the film experience," Platt says. "The good part is you're working on this project piece by piece and can really concentrate on perfecting only a few lines at a time. On the flip side, there's nothing like experiencing the whole character chronologically as we do on stage."

Platt's Elder Cunningham, Platt's character is fully realized and surprisingly appealing as a counterpoint to the other elders. Platt commends Parker and Stone for avoiding taking cheap shots at Mormonism for the sake of laughs, despite their obvious obsession with the religion.

"The interesting thing about the show is how much heart it has," Platt says. "It's a big, riotous evening out, but audiences fall in love with the show because they care about the narrative, and people become very invested in Price and Cunningham and want to see them get along."

If there's a moral to "The Book of Mormon," Platt says it's about finding faith in the community and the people you know rather than fantastic tales and things that can't be known. For the character of Elder Cunningham, it's also about accepting people as they are and for what they can contribute.

While "The Book of Mormon" marks another big success for the young up-and-comer, maybe next year he'll find time to get back to school.