Gay History Made in Historic State 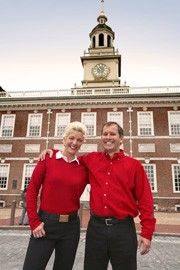 Known for its LGBT family-friendly cruises and the Emmy nominated documentary, "All Aboard! Rosie's Family Cruise," R Family Vacation founders Kelli O'Donnell and Gregg Kaminsky were present to receive the honor preceding the company's first weekend "Land Cruise" in Philadelphia.

The company's choosing the City of Brotherly Love and Sisterly Affection for its first onshore short-term vacation may have been in part due to the city's award-winning LGBT tourism initiatives. Launching in 2003, Philly's "Get your history straight and your nightlife gay" marketing campaign produced the first-ever broadcast tourism commercial directed to the LGBT community.

R Family Philly Weekend included deluxe overnight accommodations at the Hyatt Regency Philadelphia at Penn's Landing, a tour and luncheon at the National Constitution Center, a tour of Independence Hall, a ‘50s themed bowling party and a closing "Broadway Brunch" at the Hyatt Regency. Upwards of 200 people attended.

"We enjoy [R Family] for the extended family it creates with the people you meet who share similar backgrounds and experiences," says Laurie Bonner. A resident from Tampa, Fla., Bonner was in Philadelphia for her fourth R Family vacation with partner Stephanie Cheseney and son Zach. Bonner and Cheseney plan to attend their fifth R Family cruise in July, and have booked a family cabin package with people they befriended in previous cruises.

"The land-based trips are intended to make the R Family experience more obtainable," says Kaminsky. "They're directed toward families who can't afford the cruises or who can't take seven days off from work."

In a surprise appearance during the '50s bowling party at Strikes Bowling Lanes, R Family figure head, Rosie O'Donnell, was also in attendance. "I don't want to be the focus," O'Donnell told The Philadelphia Inquirer. "People always ask if I'm on every trip. So far, I am. But at some point, I won't be able to."

R Family intends to continue organizing more cruises and weekend vacations. Though expansion may be inevitable, Kelli O'Donnell says she is quite fond of the company's intimate office located next door to her home. "We're going to enjoy [the company's small size] for as long as we can," she says.

Photo: Kelli O'Donnell and Gregg Kaminsky at Independence Hall by R. Kennedy for the GPTMC.