Beachwalk proposal would restore lake access, glamour back to Edgewater 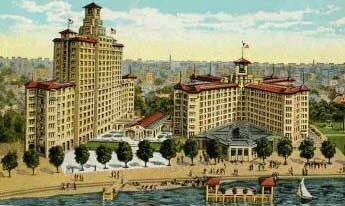 photo credit // compassrose.org
Chicago, IL - While the recent addition of Wi-Fi brought Kathy Osterman, a.k.a. Hollywood, Beach and several others into the modern age, a proposal to bring back the Edgewater Beachwalk seeks to evoke the far northside's once-glamorous past. Morry Matson and the Edgewater Beachwalk Proposal Committee have already collected nearly 1000 signatures from area residents in support of re-building the beachwalk, which will extend from Hollywood Beach up to Devon Parkway in Rogers Park.

"The old Edgewater boardwalk was a popular promenade for tourists and locals," Matson, the vice president of the Edgewater Historical Society and chair of the Proposal Committee, told ChicagoPride.com. "You could literally dive into the lake right off the walk."

A native of Billings, Montana, Matson, 42, moved to Chicago in 2000 after he fell in love with the city during his time stationed here in the 90s as a musician in the Navy. In 2001 he started an all gay opera company in Chicago and he currently owns Morry Matson Productions, located in Edgewater, which performed their first show last fall. Matson and his partner live in a historic 100-year-old building in Edgewater that is reminiscent of the same era as the original Edgewater Beach Walk.

Prominent in the 1920's through the end of the 40's, the Edgewater Beach Walk was a broad boardwalk stretching to Lake Michigan that sat in the shadow of the glamorous pink Edgewater Beach Hotel, located on Sheridan at Berwyn. The popular summer promenade was the place to see and be seen. The Beach Walk was frequented by locals, tourists and not just a few celebrities (including, reportedly, Bette Davis, Tallulah Bankhead, Nat King Cole, Marilyn Monroe, Babe Ruth, Lou Gehrig and Eloise herself, Kay Thompson, among others) and, especially, musicians who came to play in bands along the Beach Walk, a popular destination for dancing and entertainment.

"In its time, everyone stayed there and everyone danced on the glorious Beach Walk of the Edgewater Beach Hotel," Adam Langer writes in his memoir piece "Edgewater Beach Memories" about the heyday of the famous hotel and boardwalk and the summer he worked there, which appeared in the Chicago Reader in November of 1989. "They were all there, from Jeanette MacDonald to Johnny Weissmuller to Franklin Delano Roosevelt. All of the big bands played there... In the old days, the bands used to play under the sun and moon on the marble-floored Beach Walk, which went practically to the lake."

This original Beach Walk was demolished in in the early 1950s to make way for the expansion of Lake Shore Drive north past Foster and up to Hollywood. The locals lost their promenade and the hotel, already in decline due to the advent of air conditioning, television and the general changing of the times, was cut off from the beach, leading to a further loss in business. The Edgewater Hotel closed a decade and a half later in 1967.

Matson's reconstruction of the lost Edgewater Beachwalk begins a bit farther north and will exist in about four sections over the length of a mile, connecting several parks and beaches. The first section will extend from the beach house/concession area on Hollywood Beach to The North End of the lakefront bike path at Ardmore Avenue. The second section will stretch across the beach to the north end of Lane Park at Thorndale. The proposed beachwalk then continues as an elevated boardwalk from Thorndale to Berger Park and then, finally, up to Devon Avenue Park on the Loyola campus.

The proposed 50-foot wide pedestrian throughway will consist of a 28-foot wide concrete boardwalk, modeled after the vast concrete boardwalk of Virginia Beach, a 12-foot wide asphalt shared use two-lane bicycle path and a 10-foot landscaped median in between the two with lighting and inset rest intervals. The boardwalk will be at beach level along the beaches, with stairs, ramps and access from the parks, while private beaches will stay private with gated access. Along rocky shoals, the elevated platform will be at street level with easy pedestrian and handicap accessibility.

"A new boardwalk would reduce the traffic congestion on Sheridan Road," Matson said. "Bicyclists would have a safe and more visually appealing riding lane while pedestrians on the Sheridan sidewalks won't have to worry about getting hit by a biker [and] local businesses will benefit from the increased foot traffic."

There are several other proposals to improve the lakefront in Edgewater currently floating around. This includes Mayor Emanuel's and Alderman Osterman's recently proposed bike path from Ardmore to Thorndale, which is roughly the first half of Matson's proposed boardwalk.

The project would cost $4 million, but was met with mixed reviews when Osterman presented it at a neighborhood meeting in May. Matson is currently estimating his Edgewater Beachwalk proposal at $200 million, based on the price of the Virginia Beach boardwalk, but no official price estimate has been given.

"It is the most cost effective, practical and... simple yet elegant of the plans," Matson told ChicagoPride.com, adding: "The Sheridan Road high rise residents so far find our plan the most favorable."

According to a DNAinfo article from last week, Matson said U.S. Sen. Dick Durbin (D-Ill.) sent him an email asking for more details about the proposal, but neighbors concerned about the mayor's $4 million project are curious about raising funds for Matson's $200 million design.

"The big question is if we haven't got enough money to build a nice bike path from Ardmore to Thorndale, where are we going to get the money [for the Edgewater Beachwalk]?" Sheli Lulkin, president of the Association of Sheridan Condo/Co-op Owners, asked in the DNAinfo article.

With nearly 1000 signatures collected so far, Matson and the Edgewater Beachwalk Proposal Committee hope to collect thousands to present with a petition to Alderman Osterman of the 48th ward. Ideally, this will be done at the end of this year, followed by a straw poll to assess community support on the 2014 ballot. Matson and the Edgewater Beachwalk Proposal Committee will be at many street fairs, block parties, festivals and other community events this summer and fall garnering signatures and support.

They are also looking for someone to volunteer an artist's rendering of the proposed infrastructure to present at public meetings next year so that local residents can add their input before the vote in November 2014. Matson hopes to break ground in 2016, which marks the centennial of the grand old Edgewater Beach Hotel.

For more information check out their website at https://gopride.com/Z8of.