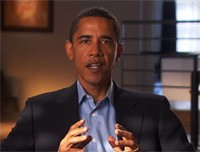 Chicago, IL - Senator Barack Obama, an Illinois Democrat who rose to prominence with his keynote speech at the 2004 Democratic National Convention, says he's taking the initial step in a bid that could make him the nation's first black president. The official announcement was made on his web site, www.barackobama.com.

"I've been struck by how hungry we all are for a different kind of politics. So I've spent some time thinking about how I could best advance the cause of change and progress that we so desperately need, " Obama said in his video posting.

The 45-year old Democratic Senator was elected to the U.S. Senate in 2004 during a campaign against the ultra-conservative Republican candidate, Alan Keyes from Maryland who received less than 30 percent of the vote.

Obama, the only black in the Senate, opposes the Iraq war, is against gay marriage yet supports gay rights, abortion rights, gun control, universal health care and tax breaks for the poor.

Though beating Hillary Clinton, Obama is the sixth Democrat to announce a presidential bid or form an exploratory committee. Senators Christopher Dodd of Connecticut and Joe Biden of Delaware, former North Carolina Senator John Edwards, the Democratic vice presidential nominee in 2004, former Iowa Governor Tom Vilsack and Representative Dennis Kucinich of Ohio have all made plans to bid for the White House.