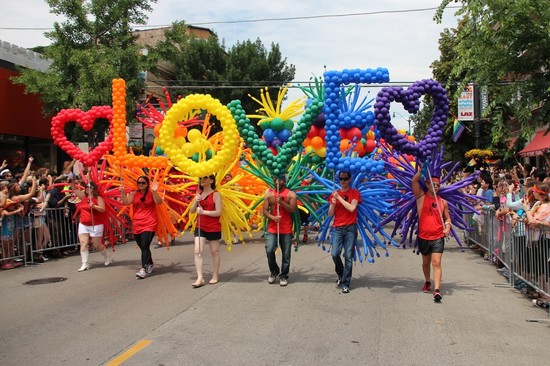 Chicago, IL - It appears to be another record-breaking year as over 1 million people turned out for the annual Chicago Pride Parade. Spectators crowded the streets from Uptown to Boystown to celebrate gay pride from the streets, rooftops and balconies on Sunday.

The 44th annual parade, lead by Mayor Rahm Emanuel and Grand Marshal Wade Davis took on added energy as gay Chicagoans and allies came out to celebrate the Supreme Court's landmark rulings on Wednesday declaring an end to the Defense of Marriage Act (DOMA) and restoring marriage fairness in California.

Among those appearing in the parade were Mayor Emanuel, Governor Pat Quinn, state Rep. Greg Harris (D-Chicago) and other politicians and advocacy groups, who were focused on equal marriage for Illinois.

"Today's parade should be a push now for Springfield to actually do what we need to do," Mayor Emanuel told reporters before the parade. "Let's get Illinois on the map as it relates to honoring gay marriage and gay couples."

Despite the Supreme Court victories on marriage rights, it's been a rough year for marriage equality in Illinois after the Illinois House failed to call same-sex marriage legislation during their spring session.

Many in the community were outraged over the failure in Springfield, which sparked a call to ban politicians from the annual parade. PRIDEChicago, the parade organizers, said that would not happen.

"Today was especially wonderful in no small part to the Supreme Court overturning DOMA," state Rep. Sara Feigenholtz (D-Chicago) told ChicagoPride.com. "It's always validating when what we feel in our hearts becomes the law of our country and that fundamental fairness prevails. Now, just one more hurdle in Illinois and marriage equality will become a reality for couples who want to wed in our state."

State Rep. Greg Harris (D-Chicago), the chief sponsor of Illinois' same-sex marriage bill, said in an interview during the parade, "Now the Illinois General Assembly just needs to step up and pass the marriage equality bill."

Parade organizer Richard Pfeiffer said, "The parade had it's political aspects and celebratory aspects, so it seemed to be balanced." He also indicated Davis and the former NFL players received a warm welcome from the crowd.

The longer route, which debuted last year, seemed to accommodate the large number of spectators without major incidents being reported.

Chicago Police said over 1 million people attended. Pfeiffer was not able to immediately provided an estimate on the crowd, but said that major incidents had not been reported. Last year's parade drew 850,000 spectators in what has become one of the largest parades in Chicago.

Crowd favorites included the Sidetrack race-car themed float, an entry by The Baton Show Lounge and a return by Balloons by Tommy with an entry of colorful balloons that spelled out "Love."

The Chicago Pride Parade was the culmination of Pride month activities in Chicago.