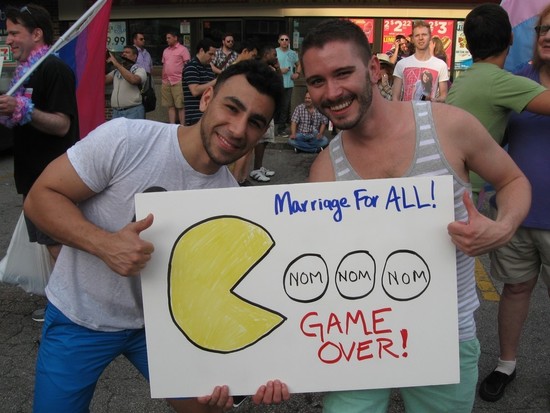 day of decision rally in boystown

Day of Decision rally draws hundreds to Boystown on Wednesday

Chicago, IL - DOMA was struck down, a Prop 8 challenge was dismissed, but as Chicago's LGBT community gathered in Boystown for a rally, organizers said it remains "painfully aware here in Illinois" of the shortcomings.

"This is a significant ruling and something that we should all be proud of and celebrate," said Rick Garcia, Policy Director and Director of the Equal Marriage Illinois Project. "But we are still painfully aware here in Illinois (that we do not have full marriage equality). ... If we want it, we've got to do it. We've got to hold all (the politicians') feet to the fire."

Garcia was speaking about the failure of the Illinois House to call Senate Bill 10, or the Religious Freedom and Marriage Fairness Act, which would have made same-sex marriage legal in Illinois.

Over a hundred people participated in the Day of Decision rally at the corner of Halsted and Roscoe in the heart of Chicago's LGBT community. The rally, which was organized by the Gay Liberation Network, was followed by a march through Lakeview, according to Lakeview Patch.