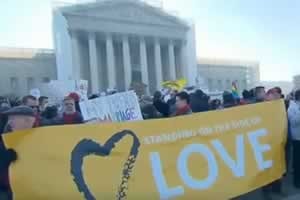 Washington, DC - The Supreme Court on Tuesday did not rule on two cases related to gay marriage, leaving them for the final day of the court's term.

The high court released three opinions on Tuesday morning, including a historic decision on the Voting Rights Act.

"Same-sex marriage rulings will not be out today," SCOTUSblog tweeted to its more than 106,000 followers. "Waiting on word on the next decision day."

The court said that it would return on Wednesday.

The cases, which were heard by the justices in March, challenge the constitutionality of Proposition 8, California's gay marriage ban, and the Defense of Marriage Act (DOMA), which prohibits federal agencies from recognizing the legal marriages of gay and lesbian couples.

Joseph Backholm, executive director of the Family Policy Institute of Washington, a group which last fall unsuccessfully campaigned to keep a gay marriage law in Washington from taking effect, prematurely released his group's reactions to the rulings.

Decisions striking down Prop 8 and DOMA, according to Backholm, would be "so lacking in foundation in the text of the Constitution, or in the history or traditions of our country" that the "Court raises serious questions about its legitimacy." He added that conservatives would "never accept the Court's assertion of a 'right' to change the definition of our most fundamental social institution."

Meanwhile, supporters are preparing win-or-lose events throughout the nation to mark the occasion. In California, AFER, the group formed to challenge Prop 8, is promoting its Decision Day event, which will take place in West Hollywood at 5:30PM on the day the court rules.

Of course, whether to celebrate or commiserate remains the question. Experts predict that the court will strike down DOMA.

The possible outcomes in Hollingsworth v. Perry, the Prop 8 case, vary from a narrow decision allowing the plaintiffs in the case, two gay couples, to marry, to a broad ruling which could affect the entire nation. The court could also uphold Prop 8. But more likely, experts say, is a decision that would limit the expansion of such rights to California.