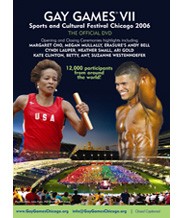 Ceremonies, athletes, culture and the City of Chicago once again take center stage

Chicago, IL - Just in time for the holiday gift season, the organizers of the 2006 Gay Games in Chicago have released a feature-length DVD with more than two hours of coverage from the huge July sports & cultural festival. With national distribution by Wolfe Video, the DVD is available for sale for US$19.95 online at www.GayGamesChicago.org.

Culled from 200 hours of raw video footage taken by a dozen camera crews throughout the week, the DVD captures all of the action and spirit of the Gay Games and includes:

• Tom Waddell Tribute Video – 4 minute video honoring the founder of the Gay Games movement with commentary by Olympians Greg Louganis and Leigh-Ann Naidoo, former NFL players Esera Tuaolo, Dave Kopay, and Roy Simmons, and a dozen other gay sports legends.
• Sports, culture and entertainment photo slide show with over 400 of the best photos shot by 60 official Gay Games photographers.
• Tribute to the 400 courageous Gay Games sponsors from around the world.

The Official Gay Games VII DVD is available for sale through Wolfe Video with a direct link available at www.GayGamesChicago.org. Pre-orders purchased through the Gay Games organization are being shipped before December 1. The Gay Games VII DVD is closed captioned. It is executive produced by Chicago Games, Inc., and is produced and directed by Brenda Schumacher, former Broadcast Communications Director of Chicago Games, Inc.