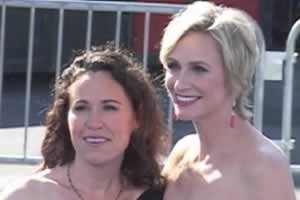 Jane Lynch, who is best know for playing Coach Sue Sylvester on the Fox musical-comedy Glee, announced Monday that she is splitting from her wife of three years, Dr. Lara Embry.

"Lara and I have decided to end our marriage," Lynch wrote in a statement given to PEOPLE.com."This has been a difficult decision for us as we care very deeply about one another. We ask for privacy as we deal with this family matter."

The women married in a private ceremony in Sunderland, Massachusetts in 2010, a year after they had met at a fundraiser held in Embry's honor in San Francisco. Among those in the wedding party was Embry's daughter, Haden.

"The day after I met my wife, I met my daughter. I don't really like kids; I'm a dog person. But you couldn't have designed a better kid for me. She's witty, wise beyond her years, she has a huge heart, and such patience with the frailties of human nature," she said.

Lynch is currently starring as Miss Hannigan in The Broadway production of Annie: The Musical and performed at the Tony Awards on Sunday.