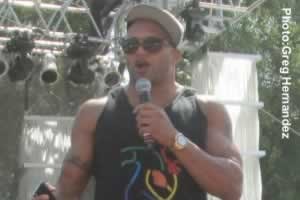 Villaraigosa called his last turn at Pride as mayor bittersweet.

"What I do with this community, I've said many times, I've done for a long time and I'll continue to do going into the future and that's true whether or not I'm in public office," Villaraigosa told LGBT|POV's Karen Ocamb. "Over the years, the friendships that I've developed in this community, love and respect, mutual admiration for people who struggle every day to be embraced in the way that we all should. This is bittersweet today, because it's my last one as mayor, but as I said, I expect to be around."

After participating in the three-hour parade, Ayanbadejo addressed the crowd at the LA Pride Festival.

"It's important for me to get all my straight allies in the NFL to team up with you guys," he said. "We all know that at the end of the day, love wins, baby!"