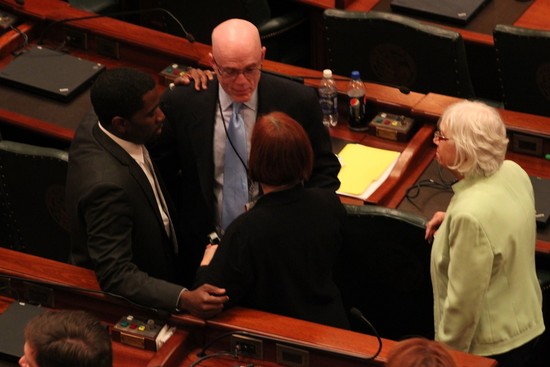 rep. greg harris after announcing sb10 would not be called

Movement this summer is seen as 'unusual'

Springfield, IL - The deadline for Senate Bill 10, or the Religious Freedom and Marriage Act, has been extended until Aug. 31, offering a small opportunity for passage over the summer.

There was no vote on SB10 before the General Assembly adjourned for the spring session. During an impassioned statement as the session closed on Friday, Rep. Greg Harris (D-Chicago), the bill's sponsor, said that the issue would be re-opened in the November veto session.

However, with the extension the bill could be included in the summer if Governor Pat Quinn were to call lawmakers back to Springfield for a special session on pension reform.

Bernard Cherkasov, CEO of Equality Illinois, while not discounting the possibility, said this would be "unusual."

"We don't have any clear indication that a special session would be called before the veto session this fall," he told ChicagoPride.com.

The extension was quietly granted by House Speaker Michael Madigan (D-Chicago) on Friday. There are a number of hurdles that come with the extension, including a change in the effective date from ‘30 days' from a gubernatorial signature to Jan. 1 in order to avoid a 3/5th or 71 vote requirement. The change would also require approval by the Senate.

Ultimately the extension does not change the underlying facts - including lack of support - that caused Harris not to call the bill on Friday.

Cherkasov said his group returned to work today in areas of the state where support for marriage equality is lacking.